Rwandan President Kagame was set for a second seven-year term after provisional results showed he had won 93 percent of the vote in presidental election. 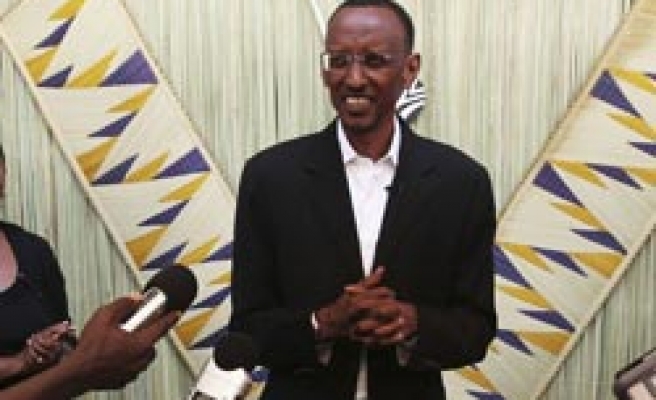 Rwandan President Paul Kagame was set for a second seven-year term after provisional results on Tuesday showed he had won 93 percent of the vote in an election marred by the repression of dissent.

Preliminary results from the National Electoral Commission, broadcast on a large screen at an overnight victory celebration in a Kigali stadium, showed that in 11 out of 30 districts Kagame had garnered 1,610,422 out of 1,734,671 votes cast.

Supporters of Kagame, who has been in control since his rebel army swept to power and ended the genocide of 800,000 ethnic Tutsis and moderate Hutus in 1994, hailed their hero as fireworks crowned the victory celebration at the stadium.

"We are here to celebrate because I think that Paul Kagame won the elections and he is a hero so I want to support him all the way," Alice Kamanzi said.

Kagame danced with his family and thanked supporters gathered at the Amahoro Stadium, where thousands of ethnic Tutsis sought refuge during the genocide.

Two newspapers were suspended in April, a critical journalist was shot in the head in June and a senior member of the Democratic Green Party was found nearly beheaded in July.

Casting his ballot in Kiyovu, a wealthy suburb of the capital Kigali, Kagame said it was not his duty to create an opposition and said his focus would be to continue nurturing growth in the land-locked country of 10 million people.

"It's really a coronation of Mr Kagame. I don't think we'd call it a genuine election," said Muzong Kodi, an Africa analyst at the Chatham House think-tank.

"It's not the manner in which the polling has been organised. The election results are decided months in advance of the polling by the way the opposition was treated, by the way dissent was clamped down on," he said.