Kenya forces close in on attackers-LIVE

Kenyan troops are closing in on the attackers. 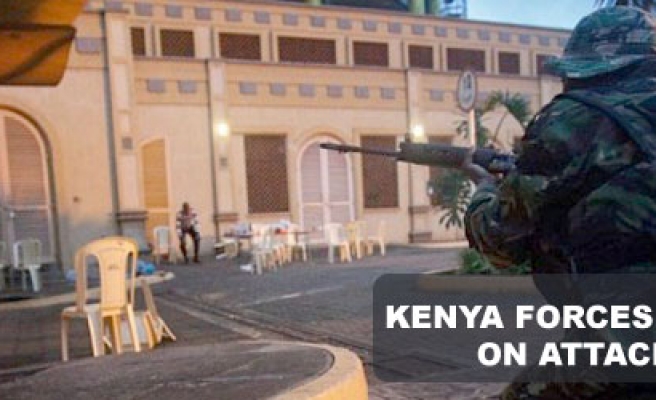 Thick smoke poured from the besieged Nairobi mall where Kenyan officials said their forces were closing in on gunmen holding hostages on Monday, three days after a raid by Somalia's al Shabaab killed at least 62 people.

It remained unclear how many gunmen and hostages were still cornered in the Westgate shopping centre, two hours after a series of loud explosions and gunfire were followed by a plume of black smoke, that grew in volume from one part of the complex.

Kenya's interior minister told a news conference that the militants - all men, though some wore women's clothing during the assault - had set a fire with mattresses in a supermarket on the mall's lower floors. Two "terrorists" had been killed on Monday, he added. Another assailant had died on Saturday.

The gunmen came from "all over the world", Kenya's military chief said, adding: "We are fighting global terrorism here."

Security officials near the scene had said the blasts heard at lunchtime were caused by Kenyan forces blasting a way in after President Uhuru Kenyatta had on Sunday dismissed a demand that he pull Kenyan forces out of neighbouring Somalia.

But Interior Minister Joseph Ole Lenku said he had no information on any explosions and a military spokesman, asked whether the militants had set off charges, declined comment.

Al Shabaab warned it would kill hostages if police moved in.

Echoing other officials, who have been at pains to highlight successes in rescuing hundreds of people trapped and terrified after Saturday's massacre, Lenku said most of the complex was under the authorities' control and escape was impossible.

A senior police officer said the authorities, who have been receiving advice from Western and Israeli experts, were "closing in". Lenku said: "We are doing anything reasonably possible, cautiously though, to bring this process to an end.

"The terrorists could be running and hiding in some stores, but all floors now are under our control."

He acknowledged "support" from foreign governments but said Kenyan forces were managing without it so far. Western powers have been alarmed by a spread of al Qaeda-linked violence across Africa, from Nigeria and Mali in the west, though Algeria and Libya in the north to Somalia and now Kenya in the east.

Nairobi saw one of the first major attacks by al Qaeda, when it killed more than 200 people with a bomb at the U.S. embassy. And while some analysts said the latest raid may show al Shabaab lashing out in its weakness after the successes of Kenyan troops in Somalia, the risk of further international violence remains.

Julius Karangi, chief of the Kenyan general staff, called the gunmen "a multinational collection". He said they had set the fire as a distraction but could now have no hope of evading capture: "If they wish, they can now surrender," he said.

"We have no intention whatsoever of going backwards."

On Sunday, President Kenyatta said 10 to 15 assailants were holding an unknown number of hostages in one location, apparently the supermarket. On Monday, it was not clear whether they may be more dispersed, including on the upper floors.

A spokesman for al Shabaab warned they would kill hostages if Kenyan security forces, who are being assisted by Western and Israeli experts, tried to storm their positions:

"Israelis and Kenyan forces have tried to enter Westgate by force but they could not," Sheikh Ali Mohamud Rage said in an audio statement posted online. "The mujahideen will kill the hostages if the enemies use force."

On Twitter, the group posted: "They've obtained large amounts of ammunition and are, by the blessings of Allah alone, still firm and still dominating the show."