"I offer the hand of peace and an olive branch so that we may 'dwell in unity, peace and liberty' [words from Kenya's national anthem] and in happiness and prosperity," Odinga, a former prime minister, said in his letter to Kenyatta. 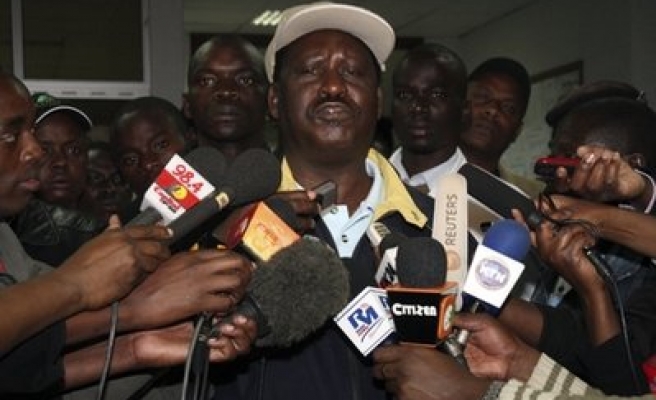 Kenyan opposition leader Raila Amollo Odinga has written an open letter to President Uhuru Kenyatta reiterating calls for national dialogue with a view to tackling the nation's most pressing problems.

"I offer the hand of peace and an olive branch so that we may 'dwell in unity, peace and liberty' [words from Kenya's national anthem] and in happiness and prosperity," Odinga, a former prime minister, said in his letter to Kenyatta.

Odinga asserted that the country's stakeholders should adopt inclusivity and national unity as a means of battling tribalism, racism and other forms of discrimination, warning that several communities felt excluded on the basis of ethnicity, identity or gender.

He also called for the devolution of political power in Kenya.

"One of the objects of devolution is to ensure that there is equitable sharing of national and local resources throughout Kenya," he said.

"The interventions of the national government through the Ministry of Devolution and Planning and other agencies are suffocating devolution and… undermining the relationship between the two levels of government, which otherwise must be conducted on the basis of consultation and cooperation between distinct and inter-dependent entities," Odinga added.

Other key issues on the proposed dialogue's agenda are corruption, national security and the electoral process.

In his letter, Odinga also assured the president that he was not trying to trespass on his leadership or organize public rallies that could lead to violence.

"I want to assure Your Excellency that we hold no grudges, nor do we want to interfere with your tenure and that of the [ruling] Jubilee administration as the president and the government of the Republic of Kenya," he said.

"We have been holding very peaceful rallies as a way, under the constitution, of engaging the people in an open and public discourse on how we can make Kenya great and prosperous – a free nation, a people liberated and an independent country in the international community of nations," he added.

He went on to point out that he had accepted defeat after last year's Supreme Court ruling when he challenged results of the last presidential poll.

"After the Supreme Court heard and determined my petition challenging the presidential elections, I accepted the verdict," he said. "I did that as a true believer in constitutionalism and the rule of law and declared that Kenya is greater than any one of us."

Jubilee majority leaders in both Kenya's National Assembly and Senate – Aden Duale and Kithure Kindiki, respectively – were both quick to reply to Odinga's missive.

"Let us state at the outset that the clamor for dialogue by [Odinga's] Coalition for Reform and Democracy (CORD) and its handmaidens in civil society has nothing to do with Kenya or Kenyans," the pair said in a joint statement.

"It has nothing to do with national unity, devolution, security, corruption or the Independent Electoral and Boundaries Commission," they added. "It has everything to do with Raila Odinga and the fact that he holds no elective office but wants to steer the country's political agenda."

The majority leaders said they were aware of the "robust engagement and intensive discourse," which they said were constantly taking place within a constitutional framework.

They said that all the issues that Odinga had brought up were being competently addressed in the legislature, where CORD was well represented, and by constitutional bodies.

"Those are structures put in place by the constitution for the articulation of matters such as those raised by Mr. Odinga," they asserted.

"That Mr. Odinga is not democratically mandated to participate in any of these conversations does not mean that they are not structured," the two leaders added.

They went on to urge Odinga to let his coalition do its bit, albeit within constitutionally-sanctioned structures.

"The government is in charge and is moving consciously and steadily to deliver the transformation it promised Kenyans," the two men said.