Kenyan deputy president returns to The Hague for ICC trial

Ruto and former radio presenter Joshua Arap Sang face charges of organizing and financing militias that participated in the Rift Valley violence in 2007 that killed more than 1,100 people and displaced more than 600,000 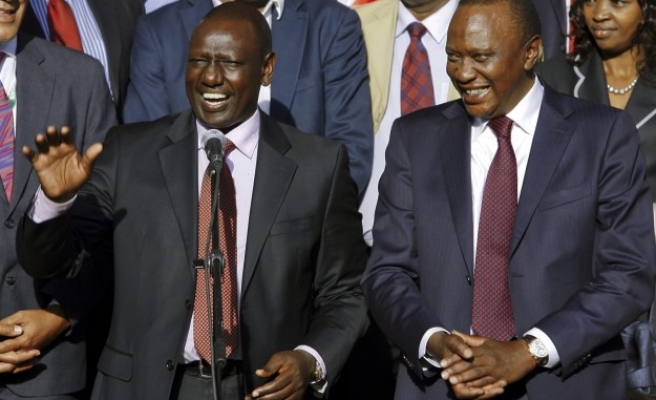 Kenyan Deputy President William Ruto left on Monday for The Hague, Netherlands, for the resumption of his trial at the International Criminal Court (ICC) on Tuesday.

Ruto told a church congregation at the Dominion Chapel in Kiserian, outside Nairobi, that he hoped the truth would come out.

A number of legislators were due to travel later in the afternoon in a show of solidarity with the deputy president.

Ruto and former radio presenter Joshua Arap Sang face charges of organizing and financing militias that participated in the Rift Valley violence in 2007 that killed more than 1,100 people and displaced more than 600,000.

The deputy president returned to Kenya last Thursday after ICC Prosecutor Fatou Bensouda sought an adjournment after witnesses failed to arrive on time for the trial.

The prosecution has since confirmed that the witnesses lined up to testify had arrived, even as it emerged that four other key witnesses withdrew their participation via e-mail communication from their safe hideouts in different countries.

Sang did not return home but attended a prayer meeting at the Faith Ministries Church in The Hague, where he called on the clergy to pray for "the truth to emerge" during the trials.

Ruto is expected to stay in The Hague for at least 18 days if he does not travel back during the weekends when the Court will not be in session.

The trial continues until October 4 when the ICC is expected to announce a two-week break. It will then resume and continue until November 1.