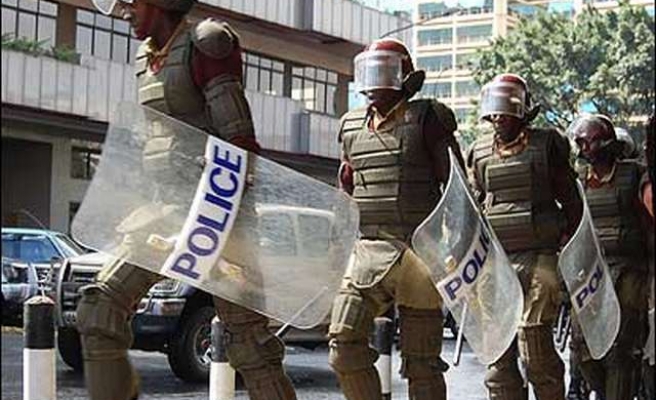 Police fired tear gas at anti-government protesters in Kenya on Monday, shortly before an opposition rally in the capital, stoking tensions in a nation haunted by past political violence and battling a wave of militant attacks.

Police shot gas canisters to disperse unruly protesters on Nairobi's streets and fired again after youths hurled stones at them from inside a central park where a few thousand people gathered for the rally, witnesses said. Calm swiftly returned.

A street protest drew a similar police response in the western city of Kisumu, a stronghold for opposition leader Raila Odinga, who called Monday's rally in the capital to demand talks with President Uhuru Kenyatta.

Odinga, who will address the Nairobi rally later on Monday, says dialogue is needed to deal with a host of grievances including a slowing economy and a spate of militant attacks, the latest of which killed 29 people at the weekend.

"Uhuru must go", chanted a group of a few hundred protesters in Nairobi's streets early on Monday. Some clambered over statues, prompting police to fire teargas.

A few thousand had gathered in the nearby park by early afternoon before the main speeches began at what the opposition promises will be a mass rally. Some chanted or danced to music, a scene that was briefly marred when some youths hurled stones at lines of police, who fired tear gas back.

"This country is not well and this government hasn't delivered a single thing from their manifesto," said Mohamed Hassan, 30, who was joining the rally in the park. "Raila Odinga wants people to get jobs and (a) poor man to get a good home."

Nairobi's streets were quieter than normal, as many Kenyans steered clear of the city centre.

Kenyatta aides have dismissed the call for dialogue, saying there are already channels for debate, such as parliament. They have accused the former prime minister of trying to claw his way back to power without a ballot, a charge Odinga denies.

Tensions were turned up when gunmen attacked two areas on the coast on Saturday, the latest in a series of assaults that have deterred tourists and stoked frustration among Kenyans who say the state is not doing enough to protect them.

Somali group al Shabaab claimed responsibility for Saturday's attacks - one in Lamu County and the other in Tana County. The group also said it carried out other attacks last month on the coast near Mpeketoni that killed about 65 people.

But the government has dismissed those claims and pointed the finger at local politicians. The opposition saw that as a blatant bid to blame Odinga and his allies, who deny any role.

Government statements have left Kenyans confused about who is behind the militant strikes and worried that political squabbling will hamper a security campaign to stop them.

"More time and resources have been spent on blaming the killings on the opposition CORD alliance and its ongoing political rallies than in restoring security in Lamu County and elsewhere where similar threats abound," wrote the Daily Nation.

In its Sunday edition the newspaper appealed to the government and opposition to "step back from the brink".

Odinga has promised Monday's gathering in Nairobi will be peaceful and is not aimed at toppling the government. Other rallies he has hosted in the past month have been peaceful.

Monday was chosen to mark the anniversary of July 7, 1990 when opponents - including Odinga - of autocrat Daniel Arap Moi launched a campaign to demand politics be opened up.

Critics say Odinga, a 69-year-old who has run for the presidency three times, has put the nation on a campaign footing with more than three years to go before any vote.

Diplomats accused both sides of playing with fire in a nation where politics and ethnic loyalties usually run in tandem and have in the past flared up. "Kenya is a tinderbox," said one Western diplomat.

A contested election at the end of 2007 sparked weeks of ethnic blood-letting that killed about 1,200 people.

"We are for peace but peace will only work when there is security and there is a total overhaul of public services so that people won't consider what tribe you hail from," said Lucky Audi Odhiambo, 27, an insurance agent at the Nairobi rally.

But Kenyatta ruled out an al Shabaab role in Mpeketoni and Deputy President William Ruto appeared to follow suit on Sunday, blaming those "unable to wait for the next general election".

That has left many Kenyans angry and fearful that politicising the issue will make it harder to launch a proper security campaign or track down the culprits.

The attacks have hit areas on the coast with long running disputes over land ownership, fuelled by ethnic rivalries between traditional coastal communities, Kenyatta's Kikuyu group, who mostly come from up country, and others. Some police officials say that suggests local factors may be to blame.

But analysts say it is too soon to rule out a role for al Shabaab, which may have changed tack, perhaps using local knowledge or sympathisers, to target a region where deep ethnic divisions could easily be re-opened.