Kenyan president asks to 'absent self' from ICC meeting

Kenyan President Uhuru Kenyatta faces charges of having committed crimes against humanity amid the ethnic violence that erupted in Kenya following disputed poll results in December 2007. 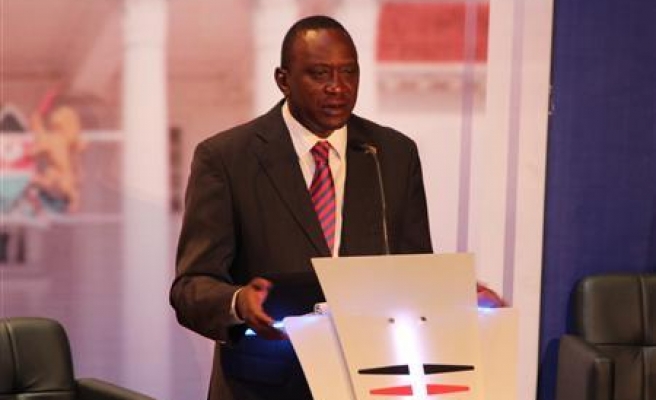 Kenyan President Uhuru Kenyatta has asked to be excused from making an appearance at a pre-trial meeting (status conference) at the International Criminal Court (ICC) in a criminal case next month in which he is a defendant, an ICC representative confirmed Friday.

"Through his lawyers [Steven Kay and Gillian Higgins], President Kenyatta has requested official permission from the court not to attend the conference," ICC spokesperson in Kenya Maria Kamara told Anadolu Agency.

"In the application, which is already at the Hague, the lawyers asked the judges to allow Kenyatta not to attend the conference and permit his lawyers to represent him," Kamara said.

Slated for October 8, the conference will include three judges tasked with assessing the progress of the case against Kenyatta.

The Kenyan president faces charges of having committed crimes against humanity amid the ethnic violence that erupted in Kenya following disputed poll results in December 2007.

Alternatively, Kamara said, the lawyers had asked judges to postpone the meeting to allow Kenyatta to attend it via video link.

According to Kamara, judges have given the prosecution and lawyers for Kenya's Post Election Victims (PEVs) until Monday to respond to the request.

The PEVs' legal team includes lawyer Fergal Gaynor, who is assisted by Caroline Walter of the Office for Public Counsel of Victims, along with case manager Anshka Sehmi.

"After the response has been filed, the judges [Koniko Ozaki, Robert Fremr and Geoffrey Henderson] will announce a date for their ruling on the president's request," Kamara told AA.

More than 1,300 people were killed in the 2007 post-electoral violence, while hundreds of thousands were forced to abandon their homes and seek refuge at internal displacement camps set up by the government.

The latest developments in the Kenyatta trial come as heads of state from member nations of the East African Community (EAC), of which Kenyatta serves as chairman, prepare for a regional summit in Uganda on October 8 – the same day the status conference is slated to take place at The Hague.

Kenyatta is also scheduled to attend celebrations on October 9 marking the 52nd anniversary of Uganda's independence from Britain.