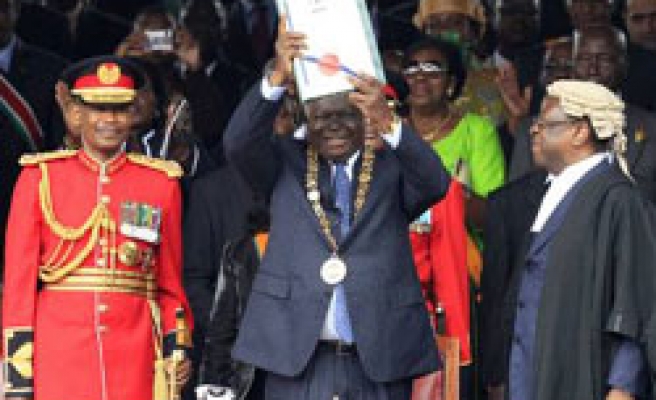 In a ceremony full of military pomp and traditional dance, Kenyans packed Nairobi's Uhuru Park -- or Freedom Park -- to see their leaders take fresh oaths under the first overhaul of the charter since 1963.

"I am here to witness the rebirth of our nation. It has been 40 years since our first constitution was made, this is a new dawn because we will realise development and the rights of Kenyans will be respected. It's a happy day for Kenyans," said Charles Oduor in the heaving crowd.

East Africa's largest economy endorsed the document in a peaceful referendum this month, as one of the reforms agreed upon to end months of murderous violence that erupted following a disputed presidential election at the end of 2007.

"No one could have thought that out of the bitter harvest of the disputed election and the violence that pitted our people against each other just two years ago, we would be witnessing today the birth of a national unity that has eluded us for more than 40 years," Prime Minister Raila Odinga said to constant cheering.

Some 1,300 Kenyans were killed in that violence and more than 300,000 others fled their homes, fearing for their lives. The International Criminal Court (ICC) is due to issue arrest warrants for the Kenyan leaders responsible.

Before penning his name to the new constitution, Kibaki greeted other regional heads of state who later all released white doves.

Nearly 70 percent of Kenyans that voted in the Aug. 4 referendum endorsed the new supreme law, hoping for a fresh start from Kenya's chequered history.

The new legal framework address issues such as corruption, political patronage, land grabbing and tribalism, which have plagued the country for decades.

Kenyans started demanding a new constitution about two decades ago, saying the basic law penned at the time of independence from Britain promoted oppression and exclusion.

The government will now set up an implementation commission, which will oversee the enactment of the new constitution in parliament.

The new document paves the ways for new counties, which will enjoy some autonomy and a share of the national budget, aimed at encouraging development in rural Kenya, where a majority of people live a subsistence lifestyle.

The normally dusty streets of the capital were swept for the occasion, and some closed to traffic to allow a parade of battle tanks and military hardware.

"Today is historic," said Dickson Orandi, holding his 18-month son Shadrack with whom he had been standing for hours. "When he grows up he can say that he was in Nairobi on that great day."