Kenyans poisoning themselves to survive 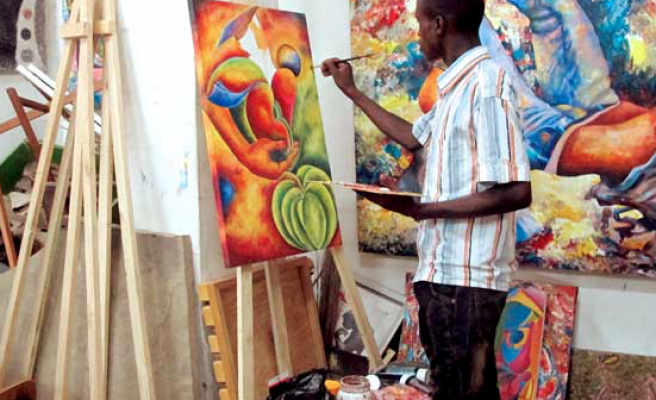 Joseph Muema has been showing up for his spray painting job for the past three years with the knowledge that his lifetime on earth shortens with each passing day, something he insists is for the sake of his family.

In the Huruma area of Nairobi, the 42-year-old husband and father of two reported for work wearing a dirty, frayed and scruffy overall. "I can't remember the last time these clothes were washed and we share them among ourselves (4 others)," he says, chuckling.

Joseph is one of thousands of Kenyans who are in the business of spray painting, exposing themselves to toxic paint every day.

He pulled at an old diesel generator starter cord which responded by coughing thick black smoke, perhaps a sign that the engine was not working as it should be. But after a brief chortle, the engine began to purr and revved to life.

In front of him was a freshly made coffin. As the generator provided pressure to the paint spray he held in his hand, Joseph tested out the pressure by blowing a thick toxic cloud of paint in the air. An unpleasant smell filled the air, stimulating a choking sensation.

"The machine is functioning properly," he said as he pressed the trigger on his paint gun and proceeded to apply dark-brown paint to the coffin.

"I do this job to feed my family. I paint furniture. Nowadays mostly coffins because it has good money," he continued. "As you can see, I have no protective breathing apparatus. They are called spray paint masks, right?" he said as he gestured to a colleague who was adding some final touches to a freshly painted coffin.

"Nail on the head," he quipped.

Joseph told me that since he started doing the job in 2014, he has been having breathing problems "which the doctors tell me is because of my job and the toxic lead-based paint that I inhale every day". He has also suffered from heart and blood pressure problems "all tied to this".

"I know that these paints are killing me and shortening my life every day, but I have to make ends meet. I will not turn to robbery, like my friend Otieno over there. Look at his skin. It is pale white. That is not how it was," he said.

"When you first start this work, you try to clean it up but as days pass, it becomes a natural color. We have chosen to kill ourselves with this poison every day just to survive."

Joseph is grateful as long as his family has food on the table and lives peacefully. "We don't really care much that we are poisoning ourselves every day with the lead," he said as his colleagues at the workshop all nodded in agreement.

At this point, Joseph was interrupted by a colleague who offered to assist him to finish his work but he waved him away dismissively, wagging his index finger.

"You have already done your part and after all, you have a terrible cough," he said in vernacular.