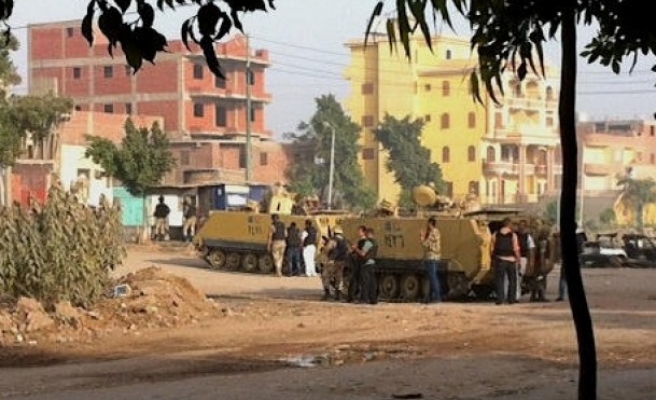 Residents of an Egyptian town stormed by security forces last week said several houses were torched during the security operation, amid conflicting reports about responsibility.

On Thursday, Egyptian army and police forces stormed Kerdasa, a town of the Giza province, with the stated aim of arresting wanted "militants and terrorists" believed to be involved in an attack on the local police station last month, which left at least 11 police personnel dead.

The attack on the police station came shortly after security forces violently dispersed two major sit-ins staged by supporters of ousted president Mohamed Morsi in Rabaa al-Adawiya, eastern Cairo, and Giza's Nahda Squda, during which hundreds of protesters were killed.

"Before the noon prayers, an armored vehicle and many police vehicles came to the house of Walid Said Abu Omeira for the second time to arrest him," a local resident told Anadolu Agency.

"When they did not find him, they ransacked the house before setting it on fire," claimed the resident, who didn't want to give his name over fears of reprisal.

"They assaulted his aging father and arrested him, and before they left, they dumped gasoline at the house and set it ablaze," the resident said.

"They even prevented people from trying to put out the fire."

Another eyewitness said security forces stormed the house of Mohamed Nasr al-Ghezlani, and when they found it was empty, they set it afire.

"The burning spree has created panic among citizens living next to targeted houses over fears that flames might extend to their homes," added the eyewitnesses, who also asked not to be named.

"Why did they burn my house?" Ashraf al-Zandahi, a Kerdasa local, asked bitterly.

"Why did they do that to me? They already know that I was outside Kerdasa when the attack on the police station happened because I was in Cairo to retrieve the body of my son who was killed in Rabaa."

The allegations were vehemently denied by a security source, saying that the troops act in accordance with the law.

"Such claims are totally devoid of truth," he told AA.

"We did not carry out such acts when we first raided the town and stormed the homes of the wanted individuals. Why would we do it now after most of our objectives are achieved?" he wondered.

The source said such claims were nothing by "rumors" spread by the Muslim Brotherhood, the group from which Morsi hails, to win popular support and distort the image of the security troops.

The source said he does not rule out the involvement of Brotherhood members in damaging these houses "after they failed to embroil police into violence."