Khalifa Haftar: A portrait of a coup general

Libya's renegade general Khalifa Haftar is accused of being behind a plot to overthrow the Libyan government. 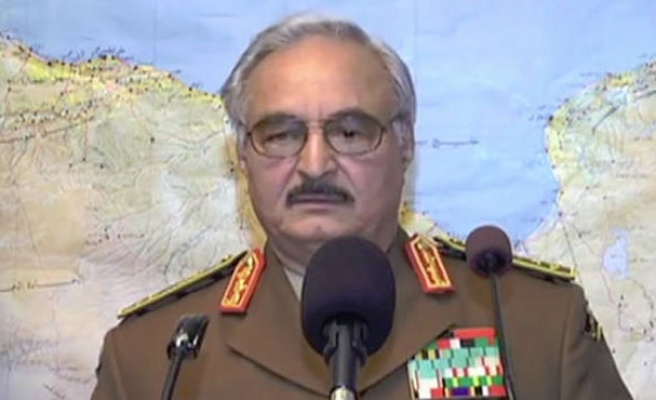 On February 12, Libya's Defence Minister revealed that security forces had blocked an attempted coup on the government. Two days later, General Khalifa Haftar, who is known for his close ties with the CIA since the 1980s, appeared on the Saudi funded Al Arabiya TV channel with a statement referring to a 'coup that is not a coup.'

Once the third man in charge during the uprising against the rule of Muammar Gaddafi in 2011, Haftar called on the suspension of the Congress to make way for an interim committee until the next elections.

At one point he was considered for the leadership post for the soldiers who defected from Gaddafi, but this was later given to Abdulfattah Yunus. After Yunus was killed, Haftar's name was among a list of suspects behind his death.

After Haftar revealed his new roadmap, the number of protests against the Congress increased, as did calls to label the Muslim Brotherhood a 'terrorist' organization as well as demonstrations in support of the general.

Known as a secular Nasserist, Haftar worked for years as Gaddafi's loyal aide. However, in the 1980s during Gaddafi's attempts to overthrow the Western-allied Chadian regime, he, along with 700 servicement under his command, fell prisoner to Chadian forces. When Gaddafi denied that he had sent troops to confront Chad and failed to protect Haftar, the CIA approached Haftar and convinced him to co-operate with them.

Haftar became the leader of the National Liberation Army, which was the armed wing with the Muhammed Magarif-led National Front, to which the former Prime Minister Ali Zeidan was also a member.

However, following the removal of Chad's pro-American leader Habre by pro-French leader Idris by means of a coup, the U.S. began to lose interest in Chad. With France's permission, Idris then attempted to form close ties with Gaddafi, but Haftar and his men stood against this.

After the CIA failed to find a base for Haftar in Zaire and Kenya, he was taken to the U.S. as a refugee. Up until the uprisings against Gaddafi started in 2011, Haftar remained in Virginia close to the CIA headquarters.

Just before the uprisings started in 2011, Haftar returned to Libya and was considered as a leader for the rebel forces. In the end, Haftar was placed third on the hierarchy. After Gaddafi's fall, he was completely passified and neutralized.

Although the mere idea of someone who has been neutralized coming back to the forefront via a media operation, when one looks at the picture of Libya as a whole, it is easy to realize that the situation there is very unique.

It is very clear that there has been an attempt to dirty the image of the Muslim Brotherhood in Libya at the same time and in the same way the process is coming about in Egypt. Also, it is clear that ex-Prime Minister and Western ally Zeidan, who along with National Forces Alliance leader Mahmud Jibril is said to have convinced the West to intervene in Libya, has transferred the responsibility of training the newly formed Libyan army to the West - especially the U.S. and the U.K. At the same time, Zeidan is accepted by Western analysts to have played a role in the capture of Al-Libi.

As the Congress seeks to strengthen its grip on the nation, Jibril and his allies have been calling people onto the streets to protest against its rule. Haftar said that he did not recognize the Congress on the Saudi-funded Al Arabiya channel, which has upped the attendance at anti-Congres protests.

For this particular segment of society, Haftar, who has also put the Muslim Brotherhood Movement under the spotlight, has become a hero.