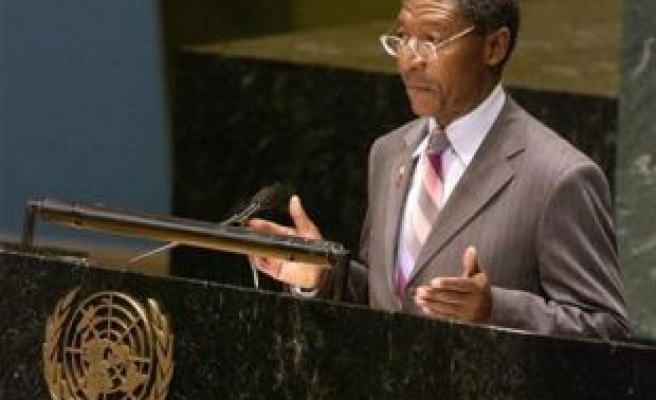 Lesotho's prime minister has asked southern African states to send peacekeepers into his mountain kingdom to restore order after an apparent coup over the weekend, his aide said on Monday.

Thomas Thabane fled to South Africa, whose territory surrounds Lesotho, early on Saturday, hours before the army surrounded his residence and overran police stations in the capital, Maseru, in what the prime minister called a coup.

Lesotho's army said it had not tried to oust Thabane but had moved against police suspected of planning to arm a political faction. One policeman was shot dead and four others wounded.

The unrest stems from a power struggle between Thabane, who is supported by the police, and Deputy Prime Minister Mothetjoa Metsing, who has the loyalty of the army, diplomats said.

Tension has risen since Thabane, who has accused Metsing of orchestrating the coup, suspended parliament in June amid feuding in the 2-year-old governing coalition.

The Southern African Development Community, or SADC, defence and security troika, which includes foreign ministers from South Africa, Namibia and Zimbabwe, met through the night with Thabane and Metsing to try to find a peaceful settlement to the crisis.

"On top of the table was a need for intervention based on the situation. We called on the SADC peace force to intervene," said Thabane's aide, Samonyane Ntsekele.

On Monday, Thabane and Metsing met South African President Jacob Zuma, who chairs SADC's defence and security body, with the regional group agreeing to send a facilitator to help resolve the crisis.

"SADC further agreed to deploy an observer team on politics, defence and security as a matter of urgency," a statement issued after the meeting in South Africa's capital, Pretoria, said.

Thabane was now on his way back to Lesotho, Ntsekele said.

In Maseru, the atmosphere was quiet but tense on Monday. The police commissioner said soldiers had carried out further raids on police installations and even officers' homes, taking away weapons and uniforms.

Commissioner Khothatso Ts'ooana told Public Choice FM radio station that this meant police would not be able to carry out their normal duties. Police stations were deserted and some officers had fled over the border into South Africa.

In Washington, the U.S. State Department said in a statement it was "deeply concerned by uncertainty over the political process and the state of public security" in Lesotho's capital. It has ordered non-employed family members of U.S. mission personnel out of the country.

Thabane told Reuters on Saturday he had fired the army commander, Lieutenant-General Kennedy Tlali Kamoli, and appointed Brigadier Maaparankoe Mahao to replace him. But on Sunday, Kamoli said he was still in charge of the military.

Lesotho, a state of 2 million people, has suffered a several coups since independence from Britain in 1966. At least 58 local residents and eight South African soldiers died during a political standoff and subsequent fighting in 1998, when Pretoria sent in troops.

Lesotho's massive mountain ranges have made it a favourite of trivia fans as "the world's highest country" - its lowest point is 1,380 metres (4,528 feet) above sea level.