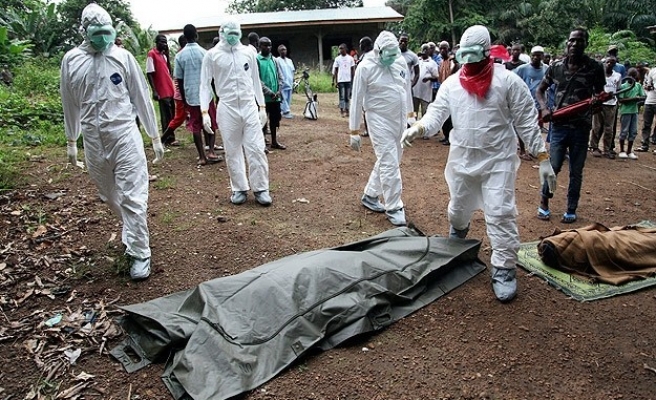 Scores of healthcare workers at Liberia's main hospital have gone on strike over unpaid wages, complicating the fight against the world's worst Ebola epidemic that the U.S. disease prevention chief said was spiralling out of control.

As well as the quickly mounting human toll, the United Nations warned the spread of the fever could lead to food shortages in West Africa, potentially further depleting the resources of governments frantically trying to contain it.

The World Health Organisation and other international bodies are scrambling to support of fragile healthcare systems in some of the world's poorest countries, but so far additional staff and resources have been slow to arrive on the ground.

More than 120 healthworkers have died during the Ebola outbreak amid shortages of equipment and trained staff in the region. That is nearly a 10th of the total 1,550 killed by the disease, mostly in Liberia, Sierra Leone and Guinea.

The strike at the John F. Kennedy Medical Center (JFK) in Liberia's capital Monrovia follows a one-day protest over pay and conditions at the Connaught hospital in Sierra Leone's capital on Monday. Both hospitals have treated Ebola patients.

"Health workers have died (fighting Ebola), including medical doctors at ... JFK and to have them come to work without food on their table, we think that is pathetic," George Williams, secretary general of the Health Workers Association of Liberia, told Reuters.

Staff at the main Ebola clinic at Kenema in eastern Sierra Leone also walked off the job last week, in protest at conditions.

"It's spiralling out of control. The situation is bad and it looks like it's going to get worse quickly. There is still a window of opportunity to tamp it down but that window is closing, and we need to act now," he told NBC News in an interview following a trip to Africa.

"This is different than every other Ebola situation we've ever had. It's spreading widely, throughout entire countries, through multiple countries, in cities and very fast," he said, speaking from CDC headquarters in Atlanta.

Frieden called on health officials to immediately seek to reverse the outbreak by sending in more resources and specialised workers, adding that the U.S. government now has 70 people in the region.

The countries affected want to fight the outbreak but face limited resources, he added. "There is a willingness there to confront it, but they need to world to support them."

Putting further pressure on the ability of the region's governments to spend money on healthcare, the epidemic has also put harvests at risk and sent food prices soaring in West Africa, the U.N. Food and Agriculture Organisation (FAO) said.

Restrictions on people's movements and the establishment of quarantine zones to contain the spread of the haemorrhagic fever has led to panic buying, food shortages and price hikes in countries ill-prepared to absorb the shock.

"Even prior to the Ebola outbreak, households in some of the most affected areas were spending up to 80 percent of their incomes on food," said Vincent Martin, head of an FAO unit in Dakar which is coordinating the agency's response.

"Now these latest price spikes are effectively putting food completely out of their reach," Martin said in a statement, adding the food crisis could hinder containment of the disease, which is typically spread via the bodily fluids of the sick.

The FAO issued an alert for Liberia, Sierra Leone and Guinea, the three countries most affected by the outbreak, which was detected in the forests of southeastern Guinea in March.

The death toll from an Ebola outbreak in the Djera region of northern Democratic Republic of Congo has risen to 31, Minister of Health Felix Kabange Numbi told Reuters on Tuesday.

The outbreak in Congo's Equateur province is thought to be separate from the West African epidemic.