Liberia wants to eradicate Ebola before 2015

The virus has killed at least 3145 Liberians in recent months and although their have been challenges to overcome it, a national campagin has aimed to eradicate the deadly virus before 2015 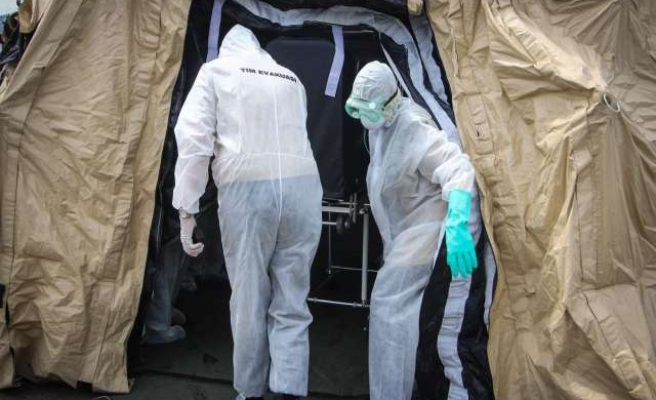 World Bulletin/News Desk
As Liberia continues to register a decline in the number of Ebola cases, President Ellen Johnson Sirleaf launched on Monday a national campaign with the objective of eradicating the deadly virus from the West African country before 2015.

"We know Ebola has hit us so badly, but this time we all have to fight to eradicate this virus before next year," President Sirleaf said at the campaign launch at a local community outside capital Monrovia.

The Ebola Must Go campaign has set a goal of zero infection case by the end of the year.

Sirleaf outlined necessary actions to achieve that goal, including safe burial of all dead bodies; keeping sick people in their own areas; exposing sick people that are hiding in communities and helping health workers find those who had come into contact with infected people.

The latest report on Liberia's Ebola crisis by the World Health Organization showed that the number of new cases continues to be stable or declining.

In recent months, Ebola – a contagious disease for which there is no known treatment or cure – has killed 6070 people, mostly in West Africa, according to the World Health Organization.

At least 3145 of these deaths were registered in Liberia alone.

He noted that healthcare workers were still being infected with the virus while the healthcare system was yet to be restored.

"With these existing situation, I think there are still a lot more to do in getting to zero by 2015," Guotar told The Anadolu Agency.

"We have poor infection control practices in facilities," he regretted. "It really does have some bad consequences."

Guotar called for a stronger partnership in which all Liberians come together to fight the deadly virus.

"We have to protect our healthcare workers," he said. "They must not die, must not get sick, they are those who we need to fight Ebola."

The Ministry of Health, for its part, is now training several health workers to respond to future outbreaks of the Ebola virus and related health challenges.

The training is a being done on three phases, two of which have already been completed.

According to an official of the Ebola Incident Management, Dr. Moses Massaquoi, 1,941 people have been trained so far.