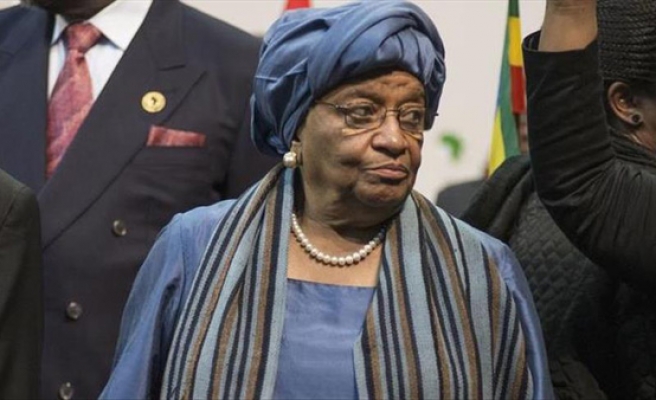 President Ellen Johnson Sirleaf told members of the Liberian National Legislature late on Monday that the country’s economy is under serious threat.

In her fifth annual message to the legislature, Sirleaf said that the global decrease in commodities prices is causing a major downturn in the Liberian economy.

“About two months ago, we were compelled to draw the attention of the nation to the ailing state of the economy influenced largely by exogenous factors including the outbreak of a deadly disease and the precipitous decline in our traditional exports of iron ore and rubber,” Sirleaf said.

According to President Sirleaf, the situation is causing hardship for many ordinary Liberians. Sirleaf announced the suspension of the tariff on imported rice, so that the foodstuff would become cheaper and more available to low-income citizens.

“I am confident that, working together, we will overcome this, as we have done with many of the challenges we have faced” the Liberian
leader said.

She called on Liberians to be more conscientious about paying taxes.

It is also critical for the government to fight corruption, Sirleaf said, and she will submit a bill to establish a Fast Track “Corruption and Financial Crimes Court” to improve enforcement.

Sirleaf will submit a bill to create “an enabling environment for Public Private Partnerships (PPPs) thereby allowing Liberia to compete more effectively with other countries in international capital markets; a National Local Content Bill to facilitate the creation of new linkages, deepen and expand existing programs between foreign companies’ affiliates and domestic small and medium-sized enterprises (SMEs); and a Special Economic Zones Law to provide potential investors with incentives to invest in Liberia.”

With the help of the African Development Bank, Liberia is finalizing a detailed two-year action plan to improve agriculture. “That starts with an inventory of farmers throughout the country and a value chain development approach that goes from farm production to agro-processing to full manufacturing. The targeted commodities are rice, cassava, cocoa, oil palm, rubber, poultry and fisheries (both marine and aquaculture),” Sirleaf said.

Sirleaf explained that she inherited a collapsed economy with an unsustainable debt level of more than 600 percent of GDP.“We were at the bottom of a very deep hole,” she said.

To cut down the debt burden, the Liberian leader said her government set out to revive production of the key commodities of iron and rubber. The government also cancelled all non-compliant forestry agreements and renegotiated the concession agreements with rubber-producer Firestone and iron-ore miner ArcelorMittal.

“We negotiated and obtained the cancellation of an external debt burden of $4.9 billion in a record period of five years under the Heavily Indebted Poor Countries (HIPC) Initiative. This important undertaking returned us to the path of economic recovery by expanding the fiscal space to pursue our agenda of inclusive growth and development,” Sirleaf said.

But conditions have worsened, and the government must tighten its belt, Sirleaf said.

"We will be unable to meet the targeted level of public sector investment that is required to meet our obligation to ongoing infrastructure projects and new priorities that are essential for our economic diversification goals," she said.

Sirleaf also announced the drawdown of UN peacekeeping forces in the country. Sirleaf assured the lawmakers that the government would be fully capable of maintaining security.