Oil-producing Libya has turned into a major transit route for refugees fleeing conflict and poverty to make it to Europe. 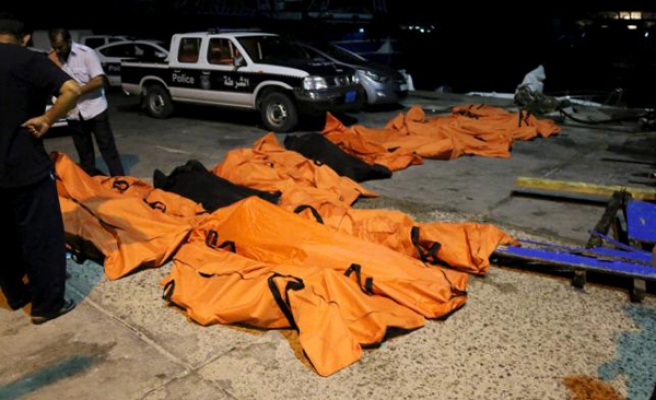 Three people have been arrested in Libya on suspicion of involvement in launching a boat packed with refugees that sank off the country's Mediterranean coast, killing up to 200 people, a security official said on Saturday.

The vessel with up to 400 sub-Saharan, Syrian and Asian refugees on board capsized on Thursday after setting off from the town of Zuwara, a major launchpad for people smugglers exploiting anarchy in a country with two rival governments.

Three Libyan smugglers involved in launching the ill-fated boat and other vessels to bring refugees to Italy have been arrested, said a security official, asking not to be named.

"They are in their twenties," he said. "We think that more are involved which we are still chasing."

Arrests of smugglers are rare in Libya, where the judiciary has little power since the country is effectively controlled by ex-rebel groups which helped to oust Muammar Gaddafi in 2011.

On Thursday, Zuwara residents staged a protest to demand authorities clamp down on smugglers who use the town to launch boats due to its proximity to the Italian island of Lampedusa.

Libya has asked the European Union for help to train and equip its navy, which was largely destroyed during the 2011 uprising.

But cooperation was frozen in 2014 as the European Union boycotted a self-declared government controlling western Libya, which seized the capital Tripoli a year ago by expelling the internationally recognized premier to the east.

Western and most Arab powers only deal with the eastern-based government, which has no control of western Libya where smugglers operate.

The number of refugees crossing the Mediterranean to reach Europe has passed 300,000 this year, up from 219,000 in the whole of 2014, the U.N. refugee agency UNHCR said on Friday.