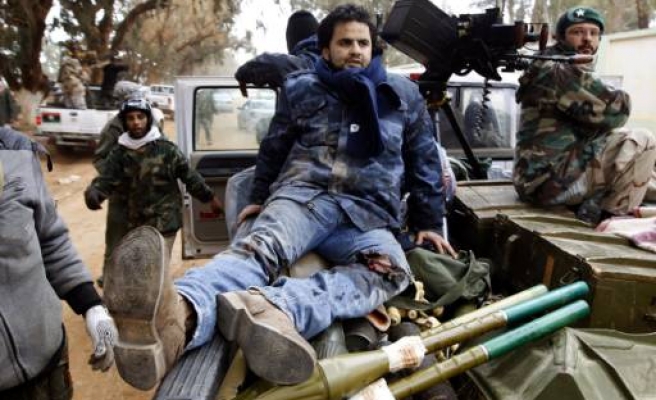 U.S. Secretary of State John Kerry on Tuesday called for a halt to "dangerous" levels of violence in Libya after militia clashes in Tripoli closed the country's main airport, destroyed most planes parked there, and prompted the United Nations to evacuate its staff.

In some of the worst violence in months, at least 15 people have been killed in clashes in Tripoli and the eastern city of Benghazi since Sunday, and a Libyan official said several Grad rockets hit the Tripoli International Airport on Monday, damaging the control tower.

With its new government struggling to impose order since the 2011 rebellion that ousted Muammar Gaddafi, Libya is sliding deeper into turmoil with rival brigades of former rebels battling for political and economic power.

So far the authorities have attempted to rein in militia fighters by putting them on the government payroll, but months of protests over oilfields and ports have cut into the government's revenues as its economic troubles mount.

A NATO coalition helped rebels topple Gaddafi, but the military alliance has not intervened to stem the subsequent chaos despite Libyan suggestions that Tripoli was looking at ways that foreign troops might be able to help.

"We are deeply concerned about the level of violence in Libya," Kerry told a news conference following talks on Iran's nuclear programme in Vienna.

"It is dangerous and it must stop. We are working very, very hard through our special envoys to find the political cohesion ... that can bring people together to create stronger capacity in the government of Libya so that this violence can end."

Government spokesman Ahmed Lamine said Tripoli was studying the possibility of international forces to improve security. But it was unclear whether there was any real Libyan proposal or international willingness to have foreign troops based in the North African state where heavily armed militias often clash.

NATO air strikes helped rebels in their civil war against Gaddafi's soldiers three years ago, but since his fall Libya struggled in its democratic transition and western governments have been frustrated in attempts to broker a political accord.

A fragile government and parliament have been deadlocked in political struggles between rival Islamist, nationalist and tribal factions each allied to competing brigades of heavily armed former rebels who refuse to disarm and often use their military might to make demands.

The latest heavy fighting broke out between rival militias vying for control of Libya's main airport on Sunday, killing at least seven people and forcing a halt of all flights in the worst fighting in the capital for six months.

The U.N. mission in Libya said the closure of Tripoli airport and the deteriorating security situation made it impossible for it to operate.

Misrata city airport was also closed on Monday, and Benghazi airport has been closed since May. That leaves only two small airports in the south and a land route via Tunisia as the country's only gateways to the outside world, a flashback to the 1990s when Libya was under U.N. sanctions.

Tripoli residents said a Grad rocket struck the airport perimeter late on Monday. A Reuters reporter at the airport heard anti-aircraft guns and other heavy weapons.

The government spokesman said 90 percent of the planes parked at the airport were destroyed.

Security and medical sources said at least six people had been killed and 25 wounded in Benghazi in heavy fighting between security forces and rival militias since late Sunday.

Libya's government has managed to end a port blockade by one brigade of militiamen who had controlled four main oil terminals to demand more autonomy for their eastern region. That protest and others at oilfields slashed the OPEC country's production.

Libya's oil production has risen to 588,000 barrels per day (bpd), the country's acting oil minister told Reuters on Tuesday, despite the increase in violence in the country since the weekend.

Oil output has been recovering since the deal with rebels to bring most of the port blockades to an end. On Sunday a spokesman for the National Oil Corp said output was at 470,000 bpd as production at the El Sharara oilfield ramps up.