Moussa Ibrahim said the report of Khamis Gaddafi's death was a ploy to cover up the killing of a civilian family in Zlitan. 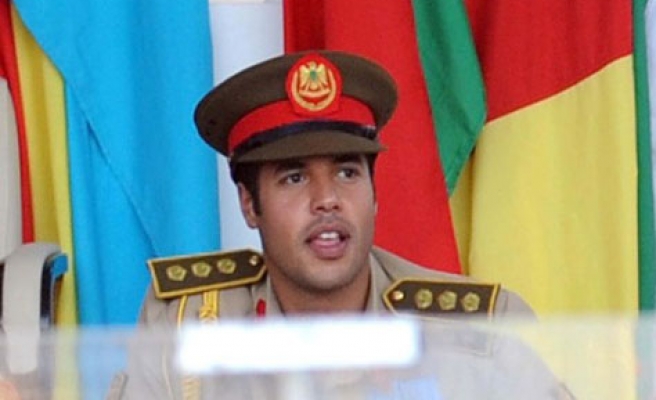 The government of Muammar Gaddafi denied a rebel report on Friday that a NATO air strike had killed the Libyan leader's son Khamis, commander of one of the government's most loyal and best-equipped units.

Government spokesman Moussa Ibrahim said the report of Khamis Gaddafi's death was a ploy to cover up the killing of a civilian family in Zlitan, a battlefront city where Gaddafi forces are trying to halt the rebel advance on Tripoli.

A rebel spokesman said the air strike had killed 32 Gaddafi loyalists in Zlitan, where Khamis Gaddafi's elite 32nd Brigade is believed to have been leading the stand to defend the approaches to Tripoli, 160 km (100 miles) away.

"We have information that in Zlitan, a leadership building was attacked by NATO and 32 Gaddafi men were killed, among them his son, Khamis," the rebel spokesman said.

NATO was not able to confirm the report of Khamis Gaddafi's death. NATO said on Thursday that it had struck at a command-and-control target in the Zlitan area.

"We cannot confirm anything right now because we don't have people on the ground," an alliance official said. "But we are trying to find out what we can."

If confirmed, the death of Khamis would be a severe blow to his father's campaign to resist a six-month-old uprising and remain in power.

His brigade of around 10,000 men is described by analysts as Libya's most effective unit and a central part of the security apparatus. In embassy cables released last year by WikiLeaks, a U.S. diplomat wrote: "The Khamis Brigade is considered the best equipped and most capable of defending the regime."

It was not the first time Khamis has been reported killed in the conflict: Arab media reported in March that he had died in a kamikaze crash by a disaffected Libyan air force pilot. Libyan state television showed footage at the time of a man resembling Khamis, which it said disproved reports of his death.

Khamis would be the second of Gaddafi's sons reported killed since the uprising against his 41-year rule began in February. The government said earlier this year that a NATO strike in Tripoli had killed Saif al-Arab Gaddafi, who unlike Khamis did not have a high public profile or a major leadership role.

On Thursday, on the western side of Zlitan, pro-Gaddafi officials showed journalists the bodies of two children they said had been killed in a NATO air strike earlier in the day. It was impossible for journalists to confirm that account.

An official at NATO operational HQ in Naples said on Thursday: "We did hit a military target at around 6:30 this morning and it was a command-and-control site".

"We always take seriously allegations of civilian casualties and are looking into it, but we have no evidence at this stage that this was caused by an air strike."

Britain said it carried out air strikes on Tuesday and Wednesday against buildings, staging posts and a tank being used by Gaddafi forces near Zlitan.

Gaddafi has so far remained in control of the capital despite severe fuel shortages and rebel advances backed since March by Western air strikes.

Rebels said on Friday they were moving closer to the eastern oil hub of Brega, capturing a hill overlooking part of the town from Gaddafi's forces and clearing landmines in their way as they prepared to make a push for it.