Libyan interim government forces get as close as half a kilometre from the centre of the deposed leader's coastal stronghold. 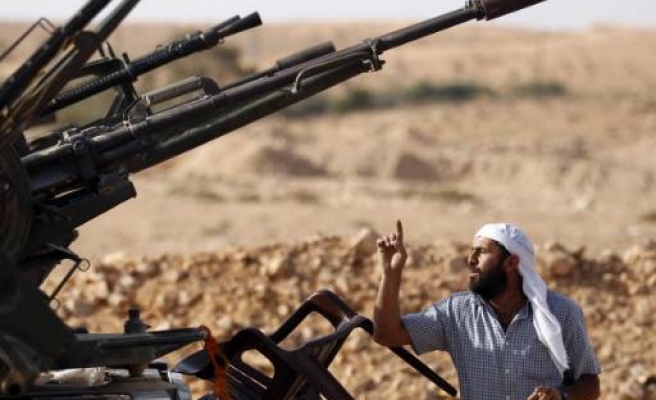 Libyan interim government forces backed by NATO warplanes have mounted their deepest thrust into Muammar Gaddafi's home town of Sirte, getting as close as half a kilometre from the centre of the deposed leader's coastal stronghold.

Gunfire could be heard coming from the town centre and black smoke rose as National Transitional Council (NTC) forces massed in Zafran Square on Saturday and moved up tanks and mortars. Pick-up trucks mounted with machineguns and loaded with fighters raced in.

Field medics said two NTC soldiers had been killed and more than 20 wounded in the fighting against pro-Gaddafi forces.

"They have snipers above the mosques, above the buildings. They're using the houses and public buildings," NTC fighter El-Tohamy Abuzein told Reuters from his position in Zafran Square.

The NTC assault plan has divided Sirte into three zones. "They took area number one and they are fighting in area number two and they are holding there until morning," NTC commander Fathi Bafhaaga told Reuters.

Reuters journalists at the scene said it was the deepest NTC fighters had got into Sirte, but it was not possible to verify whether the NTC was holding onto its gains overnight.

Taking Sirte would be a huge boost for the NTC as it tries to establish credibility as a government, and a devastating blow for Gaddafi, widely believed to be on the run inside Libya.

NATO, whose warplanes played a vital role in the six-month war that toppled Gaddafi, said its planes had hit a number of targets in Sirte in the previous 24 hours, including an ammunition depot and an anti-aircraft gun.

It said in a statement the air attacks had been mounted to protect civilians from Gaddafi forces inside the town.

"Among the reports emerging from Sirte are executions, hostage-taking, and the calculated targeting of individuals, families, and communities within the city," NATO said.

Previously, NTC forces have retreated from Sirte and the other final Gaddafi stronghold, Bani Walid, after poorly organised assaults met fierce resistance from his loyalists.

Though NTC forces have tightened their grip in the past few days on southern oasis towns that sided with Gaddafi, that progress has been overshadowed by unsuccessful efforts to take the last strongholds.

NTC commanders say their advance on Sirte has been hampered by the presence of large numbers of civilians, many of whom have fled in the past week.

A Gaddafi spokesman has accused NATO of killing several hundred civilians in strikes on Sirte. Communications have been largely cut off since the fall of the capital Tripoli last month.

NTC leader Mustafa Abdel Jalil said on Saturday interim government forces had found suspected internationally banned weapons near the towns of Sabha and Wadan, but he gave no details about them.

"There are weapons believed to be internationally forbidden, and they are under our control," he told a news conference at the NTC's headquarters in its eastern Benghazi base.

"We will seek help from local experts and the international community to get rid of these weapons in a suitable way."

The NTC, the political leadership of the rebel movement that rose up against Gaddafi's 42-year-rule and drove him from power with support from the West and several Arab nations, faces a challenge in trying to impose its authority across Libya.

It said last week it would move to Tripoli only after its forces were in full control of Libyan territory, contradicting an earlier pledge to move the interim administration from Benghazi around mid-September.

Raising a new challenge, Abdelraouf al-Kurdi, a representative of fighters from a Tripoli district, said arms seized from sites in the capital had been taken to other parts of Libya by fighters who filled the city to overthrow Gaddafi.

Interim government forces operate in disparate units based on their home towns, with little overall command.

NTC officials have said Gaddafi used mercenaries from sub-Saharan Africa to bolster his ranks during the war.

Tanks were seen moving beyond the gate towards Sirte and Reuters journalists said NTC forces got to within 40 km of the city and were planning to hold that position after nightfall.

"We are coming for you, wild-haired one," fighters chanted, referring to Gaddafi.

On Thursday, the NTC said it had taken full control of Sabha, which was the traditional base for Gaddafi's own tribe. About 800 km (500 miles) south of Tripoli, it had been occupied by fighters loyal to him.

The NTC says it also controls Jufra, to the northeast of Sabha, and the nearby oasis towns of Sokna, Waddan and Houn.

The manhunt for Gaddafi, who has been in hiding for weeks occasionally issuing audio messages through Syrian-based Arrai TV, is drawing closer to its target, NTC officials say.