Attackers bulldozed sites sacred to Sufi Muslims in the western city of Zlitan on Friday and the capital Tripoli on Saturday. 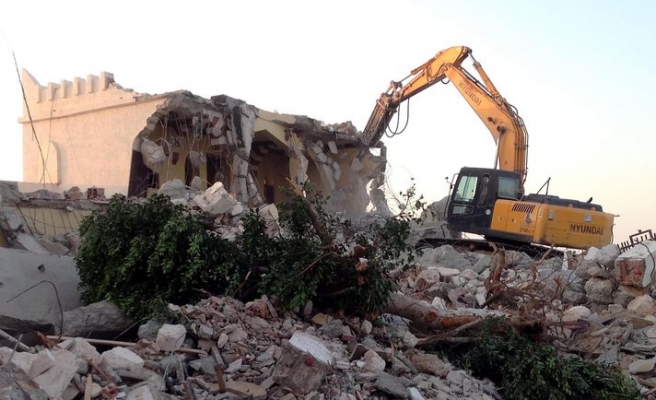 Libya's interior minister resigned on Sunday, officials said, after he was criticised for failing to halt a surge of attacks on Sufi Muslim shrines that have raised fears of the spread of sectarian violence following the fall of Muammar Gaddafi.

Attackers bulldozed sites sacred to Sufi Muslims in the western city of Zlitan on Friday and the capital Tripoli on Saturday.

Libyan police surrounded the men as they levelled the large Sha'ab mosque in broad daylight the centre of Tripoli, but did not move in to stop them, a Reuters reporter said.

Libya's General National Congress, the country's newly-elected assembly, held an emergency meeting about the attacks on Sunday and criticised government security forces for failing to stop them.

"(Interior) Minister Fawzi Abdel A'al submitted his resignation in protest against the unacceptable words from the National Congress," aide Ziad Muftah said. "The resignation has not been accepted by the prime minister's office yet."

Libya's rulers have struggled to control armed groups which are competing for power in the north African country a year after the revolution that ousted Gaddafi.

Tensions have been particularly high been between followers of the mystical Sufi tradition and Salafis, who reject many Sufi devotions as idolatrous.

On Friday, attackers used handmade bombs and another bulldozer to raze the revered resting place of Sufi figure Abdel Salam al-Asmar in Zlitan, about 160 km (90 miles) west of the capital, said an official from the area's military council.

"GANGS WANT TO ERASE US"

Sufi figures told Reuters many followers of their ancient Islamic tradition were worried the attacks would spread.

"These gangs have so much hatred for our way of life and want to erase us from the Libyan landscape," Makki Ali, a university professor and Sufi from Zlitan, told Reuters.

"As Sufis we are scared they will begin a witch-hunt and attack us in our homes if the government doesn't take control of security."

At the emergency meeting on Sunday, members of the congress said the security forces and particularly the interior ministry had not done enough.

"Where was the defence ministry? Where was the interior ministry and security forces? You are supposed to be our protectors," Akram al-Genin, a representative from the city of al-Khoms, told the assembly.

A government official, who asked not to be named, told Reuters police had tried to stop the demolition but, after a short clash, decided just to seal off the site to stop the violence spreading.

"That's a weak excuse. Sometimes you need to use force to enforce the authority of the state," Genin told Reuters after the emergency meeting.

Prime Minister Aberrahim al-Keib condemned the actions of the attackers but said Libya still needed to set up a fully organised police.

"(Libya's Supreme Security Committee) is a temporary transitional security committee, and we have just come out of a war," he told reporters.

Under Gaddafi's rule, many Salafis were jailed for their beliefs. Since that system of repression collapsed, some Salafis have formed militias to enforce their view of Islam.

Conservative Muslims across the region - emboldened by the Arab Spring revolts - have targeted Sufi sites in Egypt, Mali and other parts of Libya over the past year.