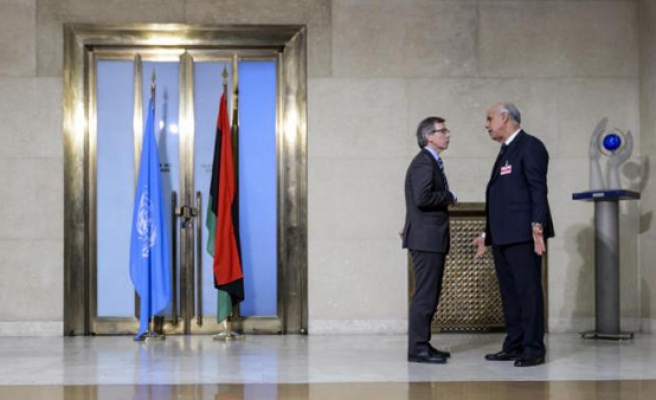 Libya's UN-brokered peace talks have met with objections on both sides, making a much-awaited dveal for a unity government in the war-torn country unlikely before a deadline on Sunday.

UN envoy Bernardino Leon has been trying for months to end the deadlock between two rival governments that has allowed armed groups and people smugglers to flourish in the chaos-wracked country.

The Spanish diplomat's peace plan calls for an accord to be reached by September 20, ahead of the UN General Assembly in New York, but successive proposals have met with resistance from one side or the other.

Libya has been sliding deeper into turmoil since the 2011 ouster of dictator Moamer Kadhafi, with two rival administrations and militias battling for control of the oil-rich North African nation.

Libya's West-backed parliament has taken refuge in Tobruk in the country's far east, while a rival parliament backed by the Fajr Libya (Libya Dawn) militia coalition has been set up in Tripoli.

The ISIL group has taken advantage of the turmoil to expand its foothold in the country, taking over Kadhafi's coastal hometown of Sirte, 450 kilometres (280 miles) east of Tripoli, in June.

ISIL has also claimed several attacks in the Libyan capital, including an assault on a prison located in the grounds of the city's airport that killed three security personnel on Friday.

Libya's emergence as a smuggling hub for migrants risking their lives to cross the Mediterranean has also added to the urgency of the long-running talks.

'BACK TO SQUARE ONE'

Leon's plan aims to form a national unity government for a two-year transition period to end with parliamentary elections.

The Tobruk legislature signed a draft deal in July but changes were made at the request of the Tripoli-based General National Congress.

Amendments suggested by the GNC -- including a call to respect a judgment of the Tripoli-based supreme court invalidating the Tobruk government -- were then rejected by the latter administration.

In the militia-held capital, meanwhile, Fajr Libya has been leading protests to call on the Tripoli parliament to reject the draft.

"It could all go back to square one," said an official at an international organisation in Tripoli who did not want to be named.

"Failure will lead to Leon... being replaced, which would mean another long process."

That would mean "the continuation of fighting on the ground," he told AFP.

The rival factions had seemed close to reaching a deal last week at talks in Morocco's seaside resort of Skhirat.

Then on Tuesday, the parliament in Tobruk in the east rejected the new draft and said it was withdrawing from the latest session of peace talks -- an announcement played down by Leon.

"I don't think that Tobruk has rejected our proposal -- according to what I'm hearing, there was no quorum, it was... not enough to constitute a consensus of the parliament," he said afterwards.

Parliamentarian Ali Tekbali however said that the decision had been official.

"The parliament took its decision and ended the session," he said. "The negotiating team in Morocco should return immediately if they don't want to be considered to be defying the parliament's authority."

"There won't be an agreement by Sunday," he said. "Even if the parliament did decide to return to the talks in Morocco, it is unlikely to be before (the holiday) Eid al-Adha which starts next Thursday."

The Tripoli parliament has not yet approved the agreement either.

"GNC members are discussing the new draft," a GNC official said. "They have not yet set a date for the vote."

Leon has said he remains optimistic that a deal can be reached before Sunday, but acknowledged that time was running out for his mediation mission.

"Of course, if there's a decision be it on September 20, before then, or in the days that follow not to continue the process, then of course my time as representative and special envoy will be over but we're not there yet."