Heavy smoke drifted across the city centre and a Reuters correspondent at a government-controlled hotel near the sprawling compound heard heavy gunfire and explosions. 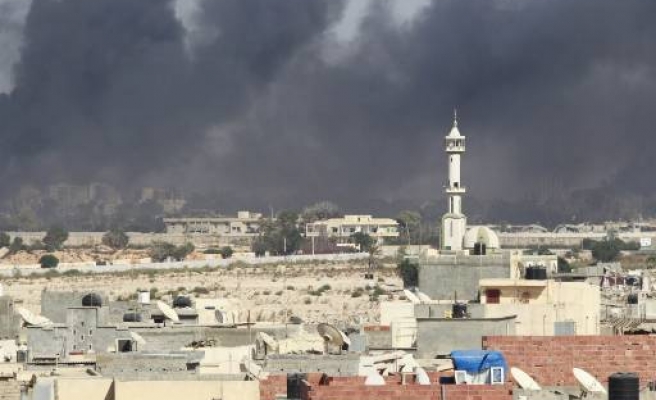 Libyan rebels battled on Tuesday around Muammar Gaddafi's headquarters, where a son of the veteran leader had emerged overnight to confound reports of his capture and to rally cheering loyalists for a rearguard fightback.

NATO jets flew in support of the rebels, who said they were trying to break into Gaddafi's fortified Bab al-Aziziya compound. His son and presumed heir Saif al-Islam had earlier told a crowd that his father was well and still in Tripoli.

Heavy smoke drifted across the city centre and a Reuters correspondent at a government-controlled hotel near the sprawling compound heard heavy gunfire and explosions. NATO declined comment on whether it had struck Bab al-Aziziya.

"The revolutionaries are trying to get in through the Old Gate on the western side," rebel fighter Muftah Ahmad Othman told Al-Arabiya television from Tripoli. "If they're successful, the fighting will move inside the compound."

Residents, many of whom had taken to the streets on Sunday to celebrate the end of Gaddafi's 42-year rule, stayed indoors as the irregular rebel armies that swept the capital ran into resistance from sharpshooters, tanks and other heavy weaponry.

Western powers, backing the disparate opposition to Gaddafi, moved ahead with plans to support a new administration with which they hope to exploit Libya's oil wealth. They renewed calls for the 69-year-old autocrat to surrender.

But his London-educated son sounded defiant when, to the surprise of journalists who had been informed by rebel officials that Saif al-Islam was in their custody, he appeared in the early hours to tell cheering supporters: "We broke the back of the rebels. It was a trap ... We are winning."

"Take up arms today," he urged a small group of loyalists.

"God willing, we will attack the rats today."

But few analysts or observers in Tripoli credit Gaddafi's core of supporters with much chance of holding out for long.

The announcements by rebel sources on Monday of the capture of three of Gaddafi's six surviving sons did not enhance their credibility when it turned out that two of them appeared to be free. One official said Saif-al Islam had escaped. Al-Jazeera said another son, Mohammed, had also fled from house arrest.

The uncharacteristically efficient rebel advance into the capital, coordinated with an uprising inside the city, seemed evidence to some analysts of the military advice and training Western and some Arab powers, including Qatar, have provided.

Many assume special forces are also active on the ground.

Saif al-Islam, who speaks English fluently, was long the face of his father's rapprochement with an energy-hungry Western world after decades of conflict. But during the course of the war he took a hard line against Gaddafi's enemies.

Hundreds on both sides may have been killed or wounded since Saturday, although reports from rebel and government officials cannot be verified. Medical staff reported difficulties in procuring supplies for those injured.

Rebels clashed with an army convoy coming from Sirte, killing dozens of Gaddafi's troops on Tuesday, Al-Arabiya TV reported. It did not say where the clash took place. NATO bombed Sirte heavily just before rebels moved into Tripoli.