Rebel fighters are in control of the centre of the town of Zawiyah, about 50 km (30 miles) west of the Libyan capital, a Reuters reporter in Zawiyah said on Sunday. 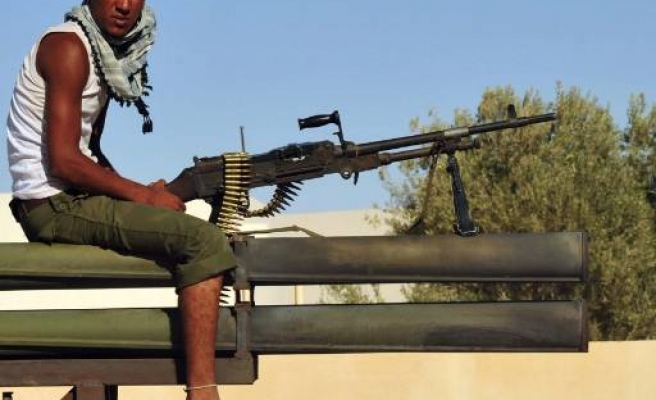 Libyan rebels hoisted their flag in the centre of this town near the capital on Sunday after the most dramatic advance in months cut off Muammar Gaddafi's capital from its main link to the outside world.

The swift rebel advance on the town of Zawiyah, about 50 km (30 miles) west of Tripoli, will deal a psychological blow to Gaddafi's supporters and also cuts the coastal highway to Tunisia which keeps the capital supplied with food and fuel.

But there was no sign Tripoli was under immediate threat from a rebel attack: heavily-armed pro-Gaddafi forces still lie between Zawiyah and the capital.

Near Zawiyah's central produce market early on Sunday, about 50 rebel fighters were milling around and triumphantly shouting "Allahu Akbar!" or "God is greatest." The red, black and green rebel flag was flying from a shop.

Rebel fighters told Reuters there were still forces loyal to Libyan leader Muammar Gaddafi in the town, including snipers. Artillery and machine gun fire could still be heard.

Rebels said the capital was their next target once Zawiyah was fully under their control. One rebel fighter smiled as he pointed to a road sign marking the highway from Zawiyah to Tripoli.

"I'm 1,000 percent sure we're going to take over Zawiyah today and then move on to Tripoli," said Bin Jaffin Ali, 34, a shopkeeper turned rebel fighter.

Further west along the coastal highway, near the main border crossing into Tunisia, local residents said late on Saturday there were heavy clashes between rebels and government troops but that Gaddafi's forces still controlled the crossing.

In Tripoli, government officials on Saturday denied Zawiyah was under rebel control, saying a small force of anti-Gaddafi fighters had launched a "suicide mission" that was quickly repelled.

Zawiyah is "absolutely under our control", government spokesman Moussa Ibrahim told reporters. "A very small group of rebels tried to move into the south of Zawiyah but were stopped easily because of our armed forces," he said.

In the Tunisian capital, where many Libyans have fled from the fighting in their home country, Libyans came out on to the streets late on Saturday to celebrate after hearing unconfirmed rumours Gaddafi and his family had fled.

But there was no indication of any change in Tripoli. State television said Gaddafi's supporters were heading to his Bab al-Aziziyah compound to show their support.

Rebels, backed by NATO warplanes, have been trying since February to end Gaddafi's 41-year rule in the bloodiest of the "Arab Spring" uprisings convulsing the Middle East.

The conflict has been largely deadlocked, but the rebels' advance to the Mediterranean coast near Tripoli represents a major shift in the balance of forces.

Control of the highway to Tunisia could determine the outcome of the conflict because without it the capital is effectively besieged.

There was no traffic moving along the highway, and rebel fighters there said it was closed.

The rebels are now positioned to the east and west of Tripoli, to the north is the Mediterranean and a NATO naval blockade, while to the south are thousands of kilometres of empty desert.

Gaddafi says the rebels are armed criminals and al Qaeda militants, and he has described the NATO campaign as an act of colonial aggression aimed at stealing Libya's oil.

Judging by impact craters, wrecked buildings and burnt-out tanks, NATO warplanes had bombed government military targets on the route of the rebel advance to Zawiyah over the past week, providing close air support.

Zawiyah is the home town of many rebels battling on the western front and has staged two uprisings against Gaddafi since the revolt broke out against his rule.

Isa Korogle, a 35-year-old unemployed man, said he had bee hiding in farmland near Zawiyah because he feared for his life since taking part in an uprising earlier this year.

"It feels like the first day of my life because I'm back in Zawiyah," he said on Sunday.