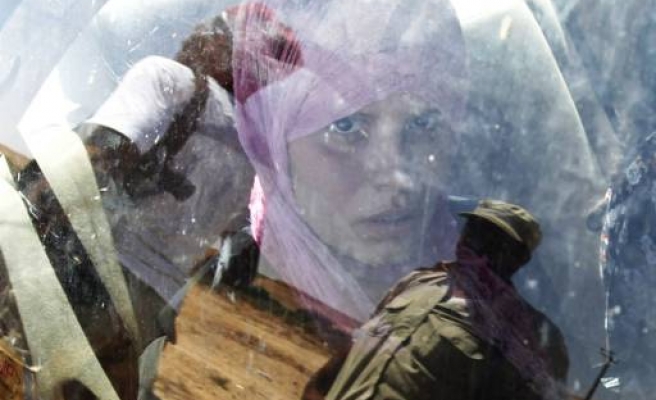 Forces of Libya's new rulers met "ferocious" street-by-street resistance during an assault on one of the last bastions loyal to Muammar Gaddafi, but were edging towards the ousted ruler's birthplace of Sirte.

The National Transitional Council's forces, which toppled Gaddafi last month, said they were facing about 1,000 loyalist fighters in the Gaddafi stronghold of Bani Walid, far more than the 100 to 150 men they had estimated earlier, while discipline had slipped in their own ranks.

"There has been a ferocious resistance from them at Bani Walid. I don't know how long it's going to take (to capture it)," NTC spokesman Jalil al-Galal told Reuters on Sunday.

Southern neighbour Niger said one of the fugitive former leader's sons, Saadi Gaddafi, had turned up there after crossing the remote Sahara desert frontier.

The NTC, which is trying to exert its control over all of Libya three weeks after its fighters stormed Tripoli, promised to unveil a new, more inclusive government in seven to 10 days.

It also said it had begun producing oil, Libya's economic lifeblood, output of which had been all but halted throughout six months of civil war. In Tripoli, NTC fighters revealed they had captured Gaddafi's foreign spy chief.

The NTC says it will not declare Libya "liberated" until it has taken control of towns still in the hands of Gaddafi loyalists. It had given those towns a deadline of Saturday to surrender and its fighters have been battling since Friday inside Bani Walid, 150 km (95 miles) southeast of the capital.

They said they were meeting tougher resistance than expected in Bani Walid, but were advancing toward Sirte, which sits on the main east-west coast road, effectively cutting Libya in two.

NTC troops said the front line was about 90 km east of Sirte. Firing from tanks, howitzers and heavy machineguns could be heard above the roar of NATO warplanes overhead.

"Gaddafi forces were firing Grad rockets, but we managed to advance a little bit and we will enter Sirte very soon," fighter Salah al-Shaery said.

The interim government has sent additional brigades to Bani Walid, but some fighters on the ground said the move had only worsened existing tribal sensitivities.

"Locals don't listen to NTC commanders," said one fighter, Esam Herebish. "They do what they like. They want to be seen as the city's liberators."

Families trapped inside Bani Walid for weeks fled the besieged town on Monday after Gaddafi forces abandoned some checkpoints on the edge of the city. Dozens of cars packed with civilians streamed out of the area.

One man driving out of Bani Walid in a car packed with women and children said they were fleeing fierce fighting in the town.

"We are leaving because of the rockets. They are falling near civilian homes," Ali Hussain said.

One NTC commander, Mohamed el-Fassi, said troops sent to reinforce the anti-Gaddafi onslaught from elsewhere in Libya had actually made advances difficult.

"When we entered Bani Walid, Gaddafi forces started firing rockets in residential areas, targeting our fighters," he said, adding that some had advanced into the town without orders to do so, contributing to their lack of progress on the front line.

"Our fighters are from all over Libya. There was little control over them yesterday. Today we will control them better," he said, adding that five NTC fighters were killed and 14 wounded in Sunday's clashes.

"We believe there are traitors among them," said Mohammed el Gahdi, a fighter from the coastal city of Khoms.

"When our forces entered Bani Walid they found the brigades of Gaddafi using citizens as shields," he told reporters. He said Gaddafi fighters had put missile launchers on the roofs of houses with civilian families inside, making it impossible for NTC forces or their allied NATO warplanes to strike.

The justice minister of Niger said Gaddafi's son Saadi had been intercepted in a convoy after crossing the frontier, heading towards the oasis town of Agadez. Two of Gaddafi's other sons, Mohammed and Hannibal, and his only daughter Aisha have already obtained shelter in Algeria.

Three sons remain at large -- Mutassim and Khamis, who both run elite military units, and Saif al-Islam, Gaddafi's one-time heir apparent who, like his father, is wanted for war crimes by the international court in the Hague. One son, Saif al-Arab, was reported killed during the war.

Asked about Saadi Gaddafi's status, Justice Minister Marou Adamou said only that Niger would fulfil its humanitarian obligations. Western powers have pressed Libya's neighbours not to shelter Gaddafi himself or officials wanted for crimes.

The NTC, based for months in the eastern city of Benghazi, faces the difficult task of winning the support of all Libyans, including fighters from towns and cities in the west who did the bulk of the fighting in the rapid advance on Tripoli.

The interim government also has to deliver on promises to quickly restart an economy frozen by international sanctions, the halt in oil production and an exodus of foreign workers.

In Tripoli, Reuters reporters saw Bouzaid Dorda, a former prime minister who ran Gaddafi's external spy service, held by a group of about 20 fighters in a house in the Zenata district.

A lanky figure in safari jacket and slip-on shoes, Dorda was sitting on a sofa and was not physically restrained, but an armed guard sat beside him. He declined a request for an interview, but in response to an assertion by a fighter that he had killed people, he replied: "Prove it."

The United Nations says it is worried about the fate of civilians trapped inside the besieged pro-Gaddafi bastions.

"Our big concern right now is Sirte, where we are receiving reports that there's no water and no electricity," U.N. humanitarian chief Valerie Amos told Reuters in an interview.