They hope that capturing the port 750 km east of the capital Tripoli will be a tipping point in their nearly six-month campaign to oust Gaddafi. 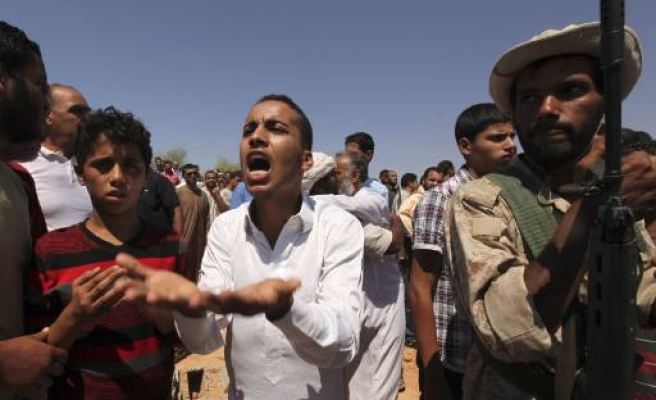 Rebels on the eastern front of Libya's civil war lost 11 men in the past 24 hours fighting to capture the strategic oil terminal and refinery at Brega on the Mediterranean coast, hospital sources said.

Sources at a hospital in Ajdabiyah to the northeast said about 50 were wounded on Thursday and Friday and one civilian in the almost deserted town was killed when a rocket fired by Libyan leader Muammar Gaddafi's forces hit a house.

The rebels have taken the residential zone of New Brega. But that is 15 km (10 miles) from the terminal and port area.

They hope that capturing the port 750 km east of the capital Tripoli will be a tipping point in their nearly six-month campaign to oust Gaddafi. They want to begin exporting oil from Brega as quickly as possible.

But the battle for it has been going on for months.

"There's close fighting in the oil terminal area this morning but maybe we can finish it off today," rebel soldier Mohammad Muftah said.

Troops loyal to Gaddafi were holding onto the oil facilities, firing rockets at rebel positions.

Libyan Deputy Foreign Minister Khaled Kaim said the rebels had not entered the city of Brega, and told a news conference more than 20 rebels had been killed in fighting round the city.

Gaddafi is clinging to power despite a near five-month-old NATO air campaign, tightening economic sanctions, and a lengthening war with rebels trying to end his 41-year rule.

The rebels have seized large swathes of the North African state, but are deeply divided and lack experience, and Thursday's gains in the east broke weeks of stalemate.

In the west, rebel forces driving north towards the town of Zawiyah, within striking distance of Gaddafi's stronghold in the capital, have not moved up from Thursday's positions.

Rebels said they had reached the village of Bir Shuaib, some 25 km from Zawiyah, which has unsuccessfully risen up against Gaddafi twice this year.

Reuters interviewed a captured intelligence officer who said Gaddafi had reinforced Zawiyah, which also has a coastal oil refinery, with about 1,000 conscripts. But there were no heavy weapons there and no African mercenaries as rebels insist.

Brigadier-General Al-Hadi al-Ujaili predicted the rebels would face a hard fight to capture the town. He said Gaddafi still enjoys strong support in Tripoli and among Libya's main tribes, which he said was crucial.

Kaim also dismissed suggestions the rebels might take Zawiya and the coastal highway. "In their dreams -- its impossible," he said.

The western battle is one of three widely separated rebel fronts against Gaddafi forces. In the east around the ports of Misrata and Brega, fighting had been bogged down in recent weeks while the western rebels have advanced.

Zawiyah lies less than 50 km west of Tripoli, on the main road to Tunisia, which has been a lifeline for Libya but has begun to crack down on rampant smuggling of gasoline.

Rebels in the Western Mountains can muster a few thousand men if their separate units join forces.

In Misrata, a port on the Mediterranean under rebel control for months and about 580 km west of Brega, six rebel fighters were killed in fighting on Friday.