Outside the pro-Gaddafi town of Bani Walid, a National Transitional Council negotiator said talks were over. 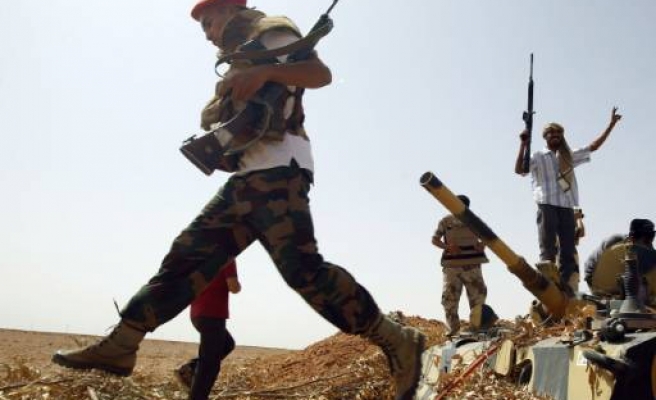 Libya's interim council said it hoped to seize one of Muammar Gaddafi's last strongholds without resistance on Sunday as it tries to control the entire country and restore normality.

Outside the pro-Gaddafi town of Bani Walid, a National Transitional Council (NTC) negotiator said talks were over.

"Everything was done yesterday, they asked us for more time and we gave them some more hours," Mahmoud Abdul Azil told Reuters, at a checkpoint 40 km (25 miles) from the desert town.

"Today, God willing, we will go in. There was some fighting overnight. They fired at us first."

Abdul Azil said NATO-backed NTC forces were just 10 km from Bani Walid and inching forward, ready to attack what he said were an estimated 100 pro-Gaddafi fighters there if necessary.

"We are waiting for the order for our commanders to go into the city. We have told them we are coming. Everyone should stay at home. Hopefully it will be done without bloodshed," he said, as warplanes roared overhead.

In Tripoli, life was returning to normal after last month's fighting and last week's Muslim holiday. Traffic was heavy as fuel supplies improved. Cafes were busy and offices opened.

NTC officials announced plans to bring their heavily-armed fighters under control and try to integrate thousands of them into the police force and find jobs for others.

"We only need the revolutionaries for the first month. We have a plan we will announce today to include 3,000 of the revolutionaries in the interior ministry who will be trained and will work in national security," interim Interior Minister Ahmad Darat told reporters.

"The rest of them work in business or are builders etc -- they don't want to be in the police. They will give up their weapons. It's just a matter of time and organisation."

Officials said there would also be retraining and reintegration schemes for those who fought for Gaddafi.

Anti-Gaddafi forces have also closed in on the deposed leader's birthplace in the coastal city of Sirte, but appear ready to allow more time for negotiations there.

"With God's grace, we are in a position of strength. We can enter any city ... but because of our care and desire to prevent bloodshed and avoid more destruction to national institutions we have given a period of one week," NTC chairman Mustafa Abdel Aziz said in the eastern city of Benghazi on Saturday.

"This is an opportunity for these cities to announce their peaceful joining of the revolution," he said.

A spokesman for Gaddafi, who has been in hiding since his foes seized Tripoli on Aug. 23, has dismissed talk of surrender and said powerful tribal leaders were still loyal to him.

"He's in the country," Moussa Ibrahim told Reuters on Friday in a call from an undisclosed location. "He's in a safe place surrounded by many people who are prepared to protect him."

Ibrahim, who said he did not know exactly where Gaddafi was, dismissed suggestions that Bani Walid was ready to surrender. He said he himself had been moving around a "southern suburb of Tripoli" with Gaddafi's son and heir-apparent Saif al-Islam.

On frontlines to the east and west of Sirte, fighters also said on Saturday they were ready to move in.

Ahmed al-Amal, a unit commander to the west, said: "Refugees coming out of Sirte have told us there's no food, fuel, water or electricity in the city. Gaddafi families in Sirte are forcing civilians to obey. They are mistreating them. A lot of people are angry and fed up."

Independent accounts from Sirte, Bani Walid and Sabha, deep in the Sahara desert, have not been available as communications appear to be largely cut off. On Friday, the International Committee of the Red Cross (ICRC) called on all sides to protect civilians and allow the agency to provide aid to Sirte.

To the east of Sirte, whose resistance still effectively divides the country in two between Benghazi and Tripoli, fighters were also dug in and, they said, ready to advance.

"We are awaiting the green light from the council," said Naji al-Maghrabi, commander of the "Omar al-Mukhtar Brigade", named for a Libyan hero of battles against Italian colonialists.

One fighter, Belqassem Souliman, said: "They have no way out but to surrender or die."