Jalil has said rebel forces will halt their offensive if Gaddafi announces his departure and give him and his sons safe passage out of the country. 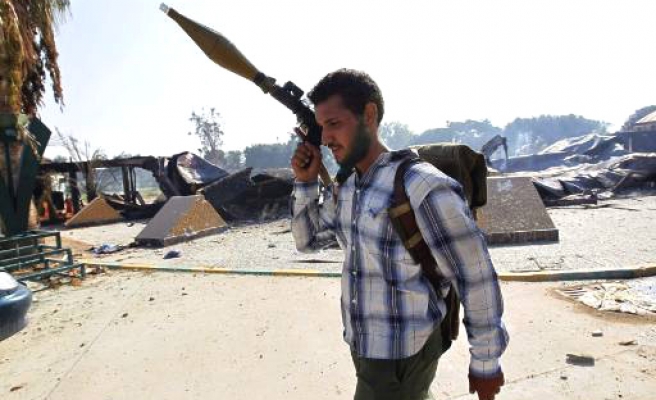 Rebel forces began to purge Tripoli's streets of gunmen still loyal to Muammar Gaddafi on Thursday in the final phase of the battle for the Libyan capital.

Rebels said they were confident they could mop up diehard soldiers clinging to a leader now on the run, presumed to be in hiding in the country he ruled for four decades.

"The end will only come when he's captured, dead or alive," said Mustafa Abdel Jalil, head of the rebel National Transitional Council (NTC), who offered amnesty to any of Gaddafi's entourage who killed him and announced a reward worth more than $1 million for his capture.

Britain said NATO was giving intelligence and reconnaissance assistance to rebels hunting Gaddafi and his sons.

Libya's new masters meet their backers in Turkey on Thursday to secure funds and make plans for a future without Gaddafi after they announced a million dollar bounty for his capture.

After rebel forces overran his Tripoli headquarters and trashed symbols of his 42-year rule, scattered pockets of loyalist diehards kept the opposition fighters at bay. Rebels also reported fighting deep in the desert and a standoff around Gaddafi's tribal home town.

In Tripoli, rockets and shooting largely kept civilians indoors and gunfire rang out in the centre. Most were anxious but hopeful the war would soon end, and with it the worsening shortages of food, water and medical supplies -- both for hundreds of wounded and for the sick.

Jalil has said rebel forces will halt their offensive if Gaddafi announces his departure and give him and his sons safe passage out of the country.

There was no clear indication of where Gaddafi is, though his opponents surmised he was still in or around Tripoli after what Gaddafi himself described as a "tactical" withdrawal from his Bab al-Aziziya compound before it was captured on Tuesday.

But Western leaders and the rebel government-in-waiting have lost no time readying a handover of Libya's substantial foreign assets. Funds will be required to bring relief to war-battered towns and develop oil reserves that can make Libya rich.

After talks with Arab and Western allies in Qatar on Wednesday, a senior rebel leader said the NTC would seek to have $5 billion in frozen assets released to jump-start the country's economy and provide vital relief to its citizens. The amount is higher than a previously given estimate of $2.5 billion.

Meanwhile, the United States submitted a draft resolution to the U.N Security Council to unfreeze $1.5 billion in Libyan assets. No vote was held on the draft on Wednesday, but diplomats said a vote could come on Thursday or Friday.

Senior diplomats will meet in Istanbul later for a Libya Contact Group meeting to discuss the next steps for the country. While Libya is rich in oil, four decades of rule by personality cult has left it with few institutions of normal governance.

It would include Russia and China, both critics of the Western bombing campaign which have been concerned at now losing out on business deals with the rebels.

Rebels have spoken of bringing back workers to restart oil export facilities soon.

The rebels, many of whom were once supporters of Gaddafi, have stressed the wish to work with former loyalists and officials and to avoid the purges of the ousted ruling elite which marked Iraq's descent into sectarian anarchy after 2003 US invasion.

Their gains are however no guarantee of security or progress with Gaddafi and his entourage at large. Abdel Salam Jalloud, a close ally who switched sides last week, said Gaddafi planned to drop out of sight and then launch a guerrilla war:

"He is sick with power," he said. "He believes he can gather his supporters and carry out attacks ... He is delusional. He thinks he can return to power."

There were signs of more supporters giving up on him, following a stream of defections during the six months of the uprising. At Tripoli's Rixos hotel where loyalist gunmen had been preventing nearly 40 foreigners, mostly journalists, from leaving, gunmen relented on Wednesday and let them go.

And the second in command of Libya's intelligence services and health minister declared their allegiance to rebel forces during interviews aired on Al Arabiya television.

Rebel fighters who swept in to Tripoli at the weekend, uniting several fronts and a variety of opposition groups, were trying to establish order in the city, but faced pockets of resistance and there were signs of looting. Snipers kept up fire from high buildings, including around Gaddafi's compound. Rebels blasted back with anti-aircraft guns mounted on pickup trucks.

"There are still many snipers in eastern Tripoli," said one rebel fighter. "We'll finish them off, but it'll take time."

Aymen, a rebel at the Mitiga airbase in Tripoli, said rebels were trying to fight their way into the Abu Slim area, not far from Gaddafi's fallen Bab al-Aziziya complex.

"They are surrounding it but Gaddafi loyalists are putting up a fight, firing from inside. We continue to comb for supporters of the fallen regime," he said by phone.

Nouri Echtiwi, a rebel spokesman in Tripoli, said rebels had released several hundred detainees from a prison in Abu Slim. The figure not be immediately verified.

Gaddafi's tribal home town of Sirte, on the coast between Tripoli and Benghazi, was still not in the hands of the new leadership who have despatched forces there.

"Talks have been ongoing for two days now between NTC and tribal leaders from Sirte to liberate the city and ensure its inhabitants lay down arms and allow access to administrative buildings," Echtiwi said.

Rebels also reported fighting in the southern city of Sabha.

Meanwhile, government buildings were being stripped of anything of value. The images on Arab satellite TV of rebels grabbing the props of Gaddafi's power, could invigorate other revolts in the Arab world, such as in Syria where President Bashar al-Assad has launched military crackdowns on protesters.

At Bab al-Aziziya, fighters were coming out with sniper rifles and ammunition, which they distributed among their ranks.

But medical supplies, never especially plentiful, were reaching critical levels in many places where some of the hundreds of casualties from the fighting were being treated. Shooting in the street also kept medics away from work.

"The hospitals that I've been to have been full of wounded - gunshot wounded," said Jonathan Whittall, head of the Medecins Sans Frontieres (MSF) mission to Libya.

"In one health facility that I visited, they had converted some houses next to the clinic into an inpatient department ... But because of the shortage of staff, there was no nursing staff and the patients were essentially caring for themselves."