Rebels have been trying to push westwards and take Zlitan, which would open the coastal road toward his Tripoli stronghold. 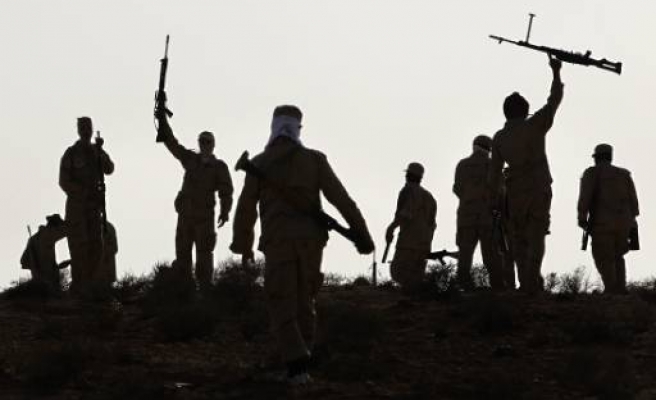 Libyan rebels on Saturday said they had launched a push to capture the coastal oil town of Brega, but were advancing slowly because Muammar Gaddafi's forces had sown minefields across its approaches.

"There's a big movement on all fronts around Brega. We are attacking from three sides," said spokesman Mohammad Zawawi.

Fighting on the eastern front of the civil war, which has moved backwards and forwards for the past months, has been bogged down for weeks on the fringes of Brega, about 750 km (465 miles) east of Tripoli.

Zawawi said rebel forces were in sight of a residential area of Brega and believed they could take the town, which is south of the rebel capital Benghazi on the eastern side of the Gulf of Sirte.

"It could be very soon, but we don't want to lose anybody so we're moving slowly but surely," he said.

In Misrata, a Qatari plane made a quick stop to offload ammunition destined for rebel fighters, sources with knowledge of the flight said. Airport officials acknowledged a Qatari plane had landed but declined to reveal details of its contents.

"The plane offloaded six pickup trucks which were packed with ammunition, and minutes later it flew off again," said one source, speaking on condition of anonymity.

Rebels have complained about a lack of weapons and ammunition to effectively push forward to the capital. France has also supplied ammunition and weapons in air-drops.

Qatar has been one of staunchest supporters of Libyans seeking to topple Muammar Gaddafi from power.

Friday was another day of claim and counter-claim in the six-month-old war now being waged on three fronts -- in the Western Mountains southwest of Tripoli, near Misrata to the east of the capital, and around Brega between Misrata and Benghazi.

Gaddafi's government on Friday denied a rebel report a NATO air strike on Zlitan, a town west of Misrata, had killed the Libyan leader's son Khamis who commands of one of the government's most loyal and best-equipped units.

Government spokesman Moussa Ibrahim said word of Khamis Gaddafi's death was a ploy to cover up the killing of three civilians in Zlitan, a battlefront city where Gaddafi forces are trying to halt the rebel advance on Tripoli.

"It's false news. This is a dirty trick to cover up their crime in Zlitan," he told Reuters.

A rebel spokesman said the NATO air strike had killed 32 Gaddafi loyalists in Zlitan, where Khamis Gaddafi's elite 32nd Brigade is believed to have been leading the defence of the approaches to Tripoli, 160 kilometres away.

NATO said it had targeted a command-and-control target in the Zlitan area but "cannot confirm anything right now because we don't have people on the ground".

Tripoli also was rocked by a long series of explosions starting around 2 a.m. local time on Sunday (0000 GMT), producing giant plumes of smoke.

Planes could be heard overhead and flames could be seen in the distance. Libyan state television said NATO airstrikes had hit civilian and military targets in Tripoli.

Rebels who cleared Gaddafi's forces from Libya's third-largest city Misrata after weeks of intense fighting have been trying to push westwards and take Zlitan, which would open the coastal road toward his Tripoli stronghold.

There have been two reports of Khamis's death in the past six months: Arab media reported in March he had died in a kamikaze crash by a disaffected Libyan air force pilot. Libyan state television countered with pictures of a man resembling Khamis, which it said disproved the report of his death.

The government said earlier this year a NATO strike in Tripoli had killed Gaddafi's son Saif al-Arab, who unlike Khamis did not have a high public profile or a major leadership role.

The rebels face numerous problems, from stalling battlefield momentum to internal splits, exposed starkly last week when military chief Abdel Fattah Younes was assassinated behind his own lines in circumstances yet to be explained.

Near the capital, rebels also control the Western Mountains southwest of Tripoli. A rebel official there, Colonel Juma Ibrahim, told Reuters his forces had set an ultimatum to the surrounded town of Tiji to surrender or face attack on Saturday.

Rebels were using loud-hailers to appeal to a tribal chief close to Gaddafi to evacuate civilians from Tiji and broker the withdrawal of pro-Gaddafi forces.

"If he does not comply, we will attack," said Ibrahim.