Libya's interim rulers said they had captured one of Muammar Gaddafi's last strongholds deep in the Sahara desert, finding chemical weapons, and largely taken control of another. 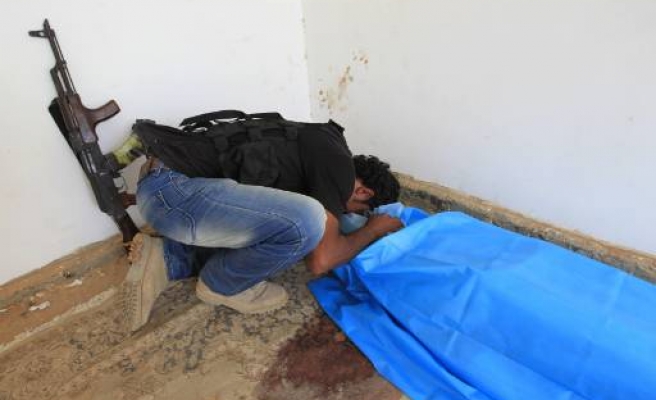 Libya's interim rulers said they had captured one of Muammar Gaddafi's last strongholds deep in the Sahara desert, finding chemical weapons, and largely taken control of another.

In another boost, the National Transitional Council (NTC) had an unexpected windfall when it found $23 billion worth of assets left unspent by Gaddafi in Libya's central bank, the Financial Times reported on Thursday, citing officials in London and Tripoli.

The NTC is under pressure to assert its control over the country and also to revive Libya's economy and finance government institutions, hit by the long struggle to overthrow Gaddafi.

The NTC's military spokesmen said its forces had seized the outpost of Jufra about 700 km (435 miles) southeast of Tripoli, and most of Sabha.

"The whole of the Jufra area -- we have been told it has been liberated," spokesman Fathi Bashaagha told reporters in the city of Misrata on Wednesday. "There was a depot of chemical weapons and now it is under the control of our fighters."

His comments could not be confirmed independently.

Under Gaddafi, Libya was supposed to have destroyed its stockpile of chemical weapons in early 2004 as part of a rapprochement with the West under which it also abandoned a nuclear programme.

However, the Organisation for the Prohibition of Chemical Weapons says Libya kept 9.5 tonnes of mustard gas at a secret desert location.

Gaddafi loyalists have been holding out in Jufra and Sabha along with the bigger strongholds of Bani Walid, southeast of Tripoli, and Gaddafi's hometown of Sirte since the fall of the capital in August.

"We control most of Sabha apart from the al-Manshiya district. This is still resisting, but it will fall," said another NTC military spokesman, Ahmed Bani.

CNN, citing a correspondent in Sabha, reported that NTC fighters had occupied its centre on Wednesday after taking the airport and a fort the day before.

However, chaos prevailed among fighters besieging Gaddafi's other two remaining major strongholds. Several attempts by NTC fighters to take Bani Walid and Sirte in the past week have ended in disarray and panicked retreat.

At Bani Walid, bored militiamen fired weapons at camels and sheep while awaiting orders on Wednesday, as much a danger to themselves as to Gaddafi fighters holed up in the town.

One man shot his own head off and killed another fighter while handling a rocket-propelled grenade in full view of a Reuters team. In another incident, a fighter wounded himself and another fighter after losing control of his machinegun.

At Bani Walid, troops from other areas have been arguing with local fighters, and there has been talk of traitors infiltrating the ranks and sabotaging the assault.

NTC official Abdullah Kenshil told Reuters that pro-Gaddafi forces in Bani Walid had killed at least 16 civilians there in the last two days after suspecting they supported the NTC.

Sporadic fighting also continued outside Sirte, where an NTC push from the east toward Gaddafi's birthplace has been blocked for days by heavy artillery fire from loyalist soldiers.

Fighters making their way back from the front line said they were meeting fierce resistance at Khamseen, 50 km (30 miles) east of Sirte, and that they lacked the firepower to respond.

"I'm 100 percent sure that there is someone important in Sirte, either Gaddafi himself or one of his sons, because his forces have become suicidal in the Khamseen area," NTC fighter Hamed al-Hachy told Reuters.

NTC officials found $23 billion worth of assets in the Central Bank of Libya this month, boosting efforts to fund the country's recovery, the Financial Times reported.

Shater said the NTC had enough money to run the country for up to six months. "We're in better shape than we anticipated initially," he added.

Libya has been pressing the international community to lift sanctions to release around $170 billion of frozen Libyan assets to the country's new leaders.

Libya's frozen assets have been held by various governments over the last half year in compliance with a U.N. sanctions regime imposed in February and March.