Libya's de facto rulers won expressions of support from Washington, the African Union and South Africa on Tuesday and its new flag flew for the first time at the United Nations. 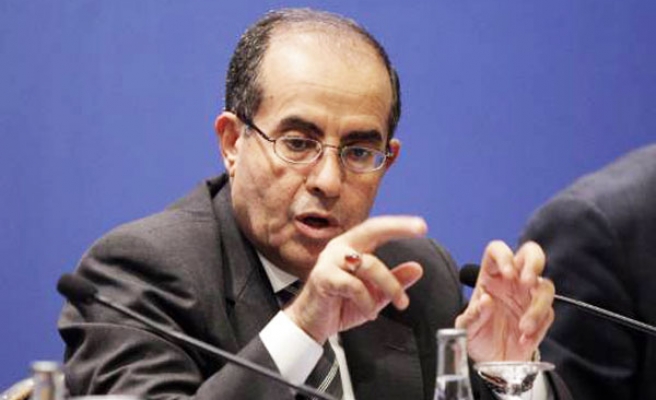 Libya's de facto rulers won expressions of support from Washington, the African Union and South Africa on Tuesday and its new flag flew for the first time at the United Nations.

"I expect the government to be announced in the next week to 10 days maximum," Jibril said after a G8 conference on aiding Arab countries' transition to democracy taking place on the sidelines of the U.N. General Assembly in New York.

"I'm not bothered by the time consumed to bring about a national consensus," he said.

Discussions in Libya to set up a more inclusive interim government have fallen apart before. The National Transitional Council (NTC), still based in the eastern city of Benghazi, has faced questions about whether it can unify a country divided on tribal and local lines.

Libya's new rulers are trying to dislodge well-armed Gaddafi loyalists from several towns and have yet to start a countdown toward writing a constitution and holding elections.

Jibril said among the considerations the interim leaders were debating were the number of ministries in the new government and whether they would be in Tripoli or divided between eastern and western Libya.

He said there would be some democratic improvements to make the OPEC member state more transparent.

"With this government comes other structures such as an international tendering body to add some sort of transparency and some credibility to the work of the government," he said.

The African Union, which frequently has been criticised for its ponderous reaction to events on its doorstep, said on Tuesday it was ready to support the NTC.

South Africa, the continent's pre-eminent economic power which has a major say in AU policy, also said it would recognise the NTC, ending a long-standing relationship with Gaddafi.

At the United Nations in New York, U.S. President Barack Obama called for the last of the deposed leader's loyalists to stop fighting and said the U.S. ambassador would return to Tripoli.

"Those still holding out must understand -- the old regime is over, and it is time to lay down your arms and join the new Libya," Obama said nearly a month after Gaddafi was driven from power with the help of a NATO-led bombing campaign.

International leaders at the U.N. conference congratulated Libyans -- and themselves -- for Gaddafi's removal by NATO-backed rebels in a seven-month conflict.

"Today, we must once again respond with such speed and decisive action -- this time to consolidate peace and democracy," Ban added.

Libya has reverted to the flag that was used from 1951 until 1977 when Gaddafi, who ruled for nearly 42 years, introduced a green flag for his Libyan Arab Jamahiriya, or people's republic.

Gaddafi, who is on the run, taunted the Western alliance in a speech broadcast by a Syrian-based television station on Tuesday, saying: "The bombs of NATO planes will not last."

Libyan troops are unable to defeat forces loyal to Gaddafi in Sirte, his birthplace, because their new rulers are failing to supply them with enough ammunition, fighters near the front line said.

In the latest reverse in weeks of chaotic fighting over the coastal city, five anti-Gaddafi fighters were killed on Tuesday after they came under artillery fire.

Fighters making their way back from the front line said they were meeting heavy resistance from loyalists at Khamseen, 50 km (30 miles) east of Sirte, and were unable to respond because they lacked the firepower.

"The military base is not supporting us with enough ammunition," said Alnoufy Al-Ferjany, the commander of a military brigade called Martyrs of Alhawry.

Days of messy battles have also failed to dislodge Gaddafi loyalists from the desert enclave of Bani Walid.

Gaddafi's spokesman Moussa Ibrahim said on Tuesday 17 foreign "mercenaries", including French and British personnel, had been captured, were being held in Bani Walid and would be shown in public soon.

NATO, French and British officials at the weekend denied a report that Gaddafi loyalists had captured some NATO troops.

Libyan interim government forces stormed a house in Tripoli on Tuesday and arrested four brothers suspected of planning bomb attacks in the capital on behalf of Gaddafi, residents and witnesses said.