Libyan army moves in to secure parliament from rebels-UPDATED

"Some members of parliament were wounded by gunfire, while others are besieged inside the building," parliament spokesperson Omar Humeidan told Anadolu Agency by phone. 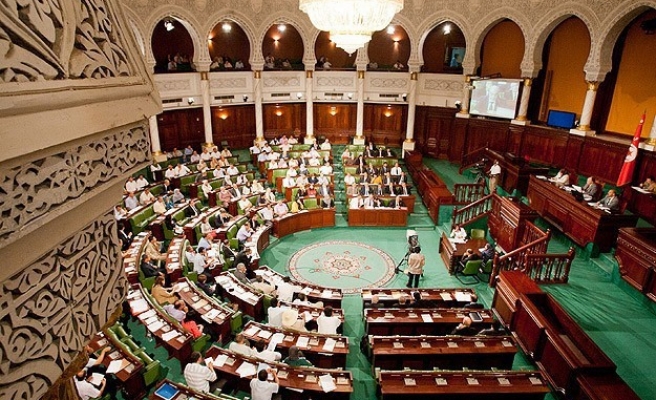 Army troops on Monday were deployed around the headquarters of Libya's interim parliament to secure the building shortly after it was stormed by armed protesters, a Defense Ministry official said.

"Some leading revolutionaries are also helping secure vital buildings in response to invitations by the chief-of-staff of the Libyan army for them to help restore order to the Libyan capital," Khaled al-Sherif, undersecretary at the Defense Ministry, told Anadolu Agency.

Late Sunday, Libyan army forces in capital Tripoli withdrew from areas around the parliament as militants ransacked the building.

Scores of people had earlier stormed the headquarters, smashing its façade and main hall and setting parts of the building alight, according to an Anadolu Agency reporter at the scene.

Libyan army personnel guarding the building had opened fire in an attempt to disperse protesters. They later withdrew, however, before mounting numbers of demonstrators.

Al-Sherif said three Libyan lawmakers had been injured by gunfire on Sunday, while others had been beaten and humiliated.

He denied reports that the Libyan army had shot at demonstrators during the night, adding that nobody had been killed.

Libya has struggled to restore order to the country in the wake of the ouster and death of longstanding strongman Muammar Gaddafi in late 2011.

Parliament to meet at Tripoli hotel

A spokesman for Libya's interim parliament said Monday the assembly would hold its first session since being attacked by armed protesters.

The attack prompted army personnel guarding the parliament to withdraw from the area.

The government called for opening dialogue with the protesters.

The mandate of Libya's interim parliament should have expired on February 7, but the assembly recently decided to extend its mandate by one year.

The U.N. mission in Libya also denounced the attack on the parliament building and stressed the importance of continuing Libya's political process with the aim of achieving democratic transition.

Parliament Speaker Nouri Abusahmain, for his part, asserted that parliament would only hand power over to an elected government.

Abusahmain added that the interim parliament would continue down the road of revolution and nation building.