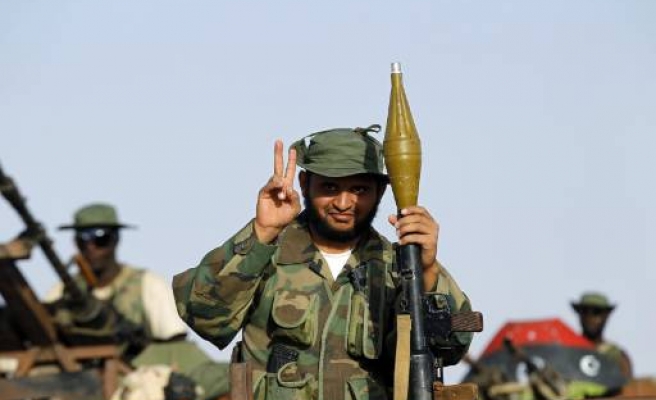 Columns of Libyan fighters sped towards the desert enclave of Bani Walid on Friday as forces loyal to the country's new leaders closed in on one of Muammar Gaddafi's last bastions of support.

Truckloads of anti-Gaddafi troops shouting "Let's go! Bani Walid!" and columns of pickup trucks mounted with anti-aircraft guns hurtled towards the town, 180 km (110 miles) south of Tripoli, kicking up clouds of dust in the desert.

"We are going in. We finally have the orders. God is greatest. God willing, Bani Walid will be free today," fighter Mohamed Ahmed said, his rifle sticking out of his car window.

Bani Walid has been under siege for two weeks, with hundreds of die-hard Gaddafi loyalists dug into its steep valleys and hills resisting advancing interim government forces.

Libya's National Transitional Council had hesitated to storm the town in fear of alienating a powerful local tribe, but earlier this week it told civilians to flee ahead of a full-out onslaught.

Fighters shook their rifles above their heads and fired defiant shots into the air, while loudspeakers urged the hundreds of men to head to the front and blared out slogans such as "We are victorious!"

"We have received orders from our commanders and we are going into Bani Walid today from different locations," anti-Gaddafi fighter Mohammed Jwaida told Reuters at a factory 20 km (15 miles) north of the city, where the NTC forces had dug in.

"We were planning to do this today anyway but Gaddafi forces launched this attack to prevent our advance. They thought we would run away, they are cowards," he said.

"We have about a thousand fighters here today," he said, adding that they would not use heavy artillery because "we do not want to harm civilians".

Earlier, rockets fired by Gaddafi forces in Bani Walid had hit the factory, which is also used as a field hospital. Doctors there said no one had been wounded or killed in the attack. An exchange of heavy machinegun fire followed and large numbers of anti-Gaddafi forces set off in pursuit of the attackers.

"The city will fall under our control, there is no other way," senior NTC official Abdallah Kanshil said.