Libya's interim government said its forces seized the airport and fort in Sabha, one of the last strongholds of forces loyal to Muammar Gaddafi which also controls the main route south out of Libya. 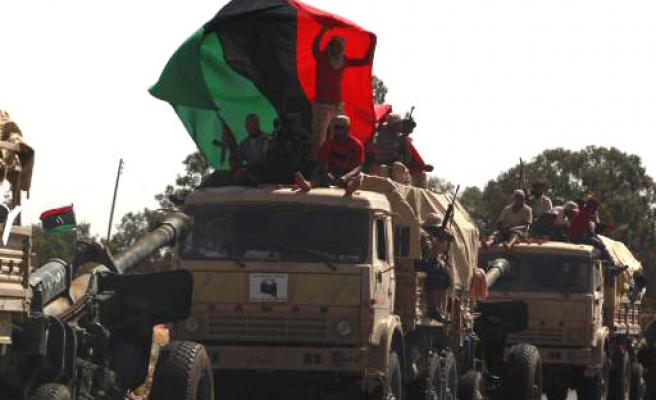 Libya's interim government said its forces seized the airport and fort in Sabha, one of the last strongholds of forces loyal to Muammar Gaddafi which also controls the main route south out of Libya.

"Our forces are there in the airport and in the castle ... Our flags are flying there," Ahmed Bani, a military spokesman for the National Transitional Council (NTC), told a news conference in Tripoli on Monday. It was not possible to get independent confirmation.

Any advance on the town would be an important boost for government forces who have struggled to contain disunity in their ranks and faced stark reversals on other parts of the battlefield.

Nearly a month after Gaddafi was driven from power, his loyalist holdouts have beaten back repeated assaults by NTC forces at Bani Walid and Sirte, Gaddafi's birthplace. NTC fighters have been sent fleeing in disarray after failing to storm Gaddafi bastions.

NTC forces with huge rocket launchers and artillery gathered outside Sirte on Monday, saying they were preparing for a fresh assault, as hundreds of families fled the town.

NTC fighter Mohamed Ahmed told Reuters the troops were advancing slowly, but holding back their heavy weaponry until civilians were clear.

Humanitarian groups have voiced alarm at reported conditions in Sirte.

"There's no electricity, no phone coverage. Nothing," resident Ibrahim Ramadan said, standing by a car packed with his family at a checkpoint.

Residents said homes had been destroyed and cars smashed to pieces as disorder spread through the city.

"People are fed up. There are explosions going off everywhere and you don't know where the bullets will come from next," said Abubakr, a resident making his way out of the city.

"Look at this," he said, pointing to a bullet hole in his windshield. "Bullets are coming down from above. People are just firing randomly."

NTC spokesman Bani denied an assertion by Gaddafi's spokesman that Gaddafi's forces had captured 17 mercenaries, some of them British and French, in the fight for Bani Walid. "There are no British or French prisoners" in the town, Bani said.

The report by Gaddafi's spokesman Moussa Ibrahim could not be verified and no immediate proof was presented.

"A group was captured in Bani Walid consisting of 17 mercenaries. They are technical experts and they include consultative officers," Ibrahim said on Syria-based Arrai television, which has backed Gaddafi.

"Most of them are French, one of them is from an Asian country that has not been identified, two English people and one Qatari."

French Foreign Minister Alain Juppe said there were "no French mercenaries in Libya", while the British foreign office said it had no information about whether the report was true. Qatar's foreign ministry was not available for comment. NATO, which is staging air strikes on Gaddafi loyalist positions, says it has no troops on the ground in Libya.

Western nations have sent special forces in the past, and media have reported that private security firms have aided anti-Gaddafi forces in training, targeting and with leadership.

Bani said NTC forces on Monday arrested pro-Gaddafi mercenary leader Belqasem Al-Abaaj, who had been operating in the south of the country.

The NTC, still based in the eastern city of Benghazi, has faced questions about whether it can unify a country divided on tribal and local lines. A long-promised attempt to set up a more inclusive interim government fell apart overnight.

On Monday, NTC forces were unable to approach the northern gate of Bani Walid, 150 km (95 miles) southeast of Tripoli, to attack the town because of heavy gunfire from Gaddafi loyalists.

"There is a lack of organisation so far. Infantrymen are running in all directions," said Zakaria Tuham, a senior fighter with a Tripoli-based unit.

Many fighters spoke of tension between units drawn from Bani Walid itself and those from other parts of the country.

Some fighters openly disobeyed orders. In one incident, an officer from Bani Walid was heckled by troops from Tripoli after he tried to order them to stop shooting in the air.

In Benghazi, interim Prime Minister Mahmoud Jibril failed to name a new cabinet on Sunday when his proposals did not receive full backing from all current members.

Sources familiar with the negotiations said Jibril's own role had been a sticking point. There was also disagreement about whether it was right to form a transitional government before declaring Libya "liberated", which NTC officials say can only happen when all Gaddafi loyalists are defeated.

The political infighting reveals some of the fractures in an alliance that was united in civil war by hatred of Gaddafi but remains split among pro-Western liberals, underground Islamist guerrillas and defectors from Gaddafi's government.

The NTC has its roots in Libya's east, but most of the militiamen who finally succeeded in driving Gaddafi out of Tripoli are from towns in the west.