NATO aircraft launched air strikes against positions of Gaddafi loyalists in Sirte, paving the way for the deep push by the NTC fighters. 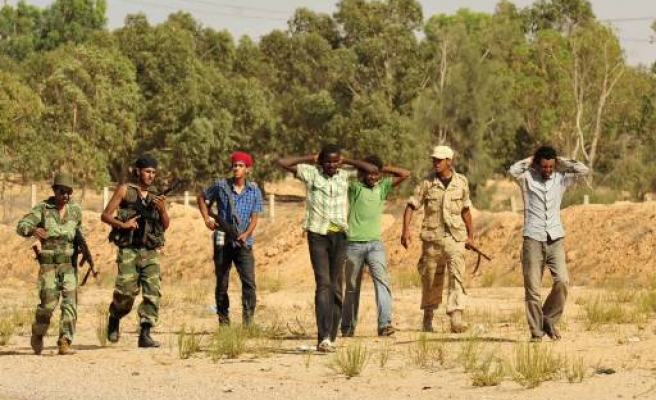 Libyan provisional government forces have closed in on Muammar Gaddafi loyalists holed up in Sirte, one of the last two bastions of the deposed leader.

The advance on Monday from the east to about 2 km (1.2 miles) from the centre of Gaddafi's home town raised hopes that the National Transitional Council (NTC) was one step closer to claiming full control of the fractured country.

NATO aircraft launched air strikes against positions of Gaddafi loyalists in Sirte, paving the way for the deep push by the NTC fighters.

Thick black smoke billowed into the air as fighters battled Gaddafi loyalists on Sunday at a roundabout 2 km from the centre of the town. The thud of large explosions could be heard as NATO aircraft roared overhead.

The advance could be short-lived, however. Interim government forces have previously retreated from Sirte and the other remaining Gaddafi stronghold, Bani Walid, after poorly organised attacks met fierce resistance.

On the western edges of Sirte on Monday, NTC fighters and Gaddafi loyalists traded heavy machine gun fire, rocket-propelled grenades and artillery rounds. Snipers loyal to Gaddafi could be seen on rooftops.

Sirte lies between Tripoli and the eastern city of Benghazi, both now held by the NTC whose rebel fighters overran the capital five weeks ago after six months of fighting.

Taking Sirte would be a huge boost for the NTC, which is trying to establish credibility as a government able to unite Libya's fractious tribes and regions, and a blow for Gaddafi, widely believed to be in hiding somewhere in Libya.

Humanitarian organisations have raised the alarm over conditions for civilians cut off in Sirte and in Bani Walid to the south.

Scores of civilians in cars laden down with personal belongings continued to stream out of the town to both the east and west. International aid groups are demanding access.

"We are very concerned about the people inside and near Bani Walid and Sirte," Georges Comninos, who heads the International Committee of the Red Cross (ICRC) in Libya, said in a statement.

Food and medical supplies were running short, he said.

NTC fighters and people who have fled Sirte have alleged that pro-Gaddafi fighters were trying to prevent civilians from leaving, effectively using them as human shields.

Gaddafi's fugitive spokesman Moussa Ibrahim said on Monday the ousted leader was in Libya and "very happy that he is doing his part in this great saga of resistance".

Ibrahim would not comment further on Gaddafi's whereabouts, but said he himself had been in Sirte the previous day. "The situation is quite bad."

Libya's de facto Prime Minister Mahmoud Jibril told a U.N. Security Council meeting on Libya that Gaddafi could still destabilise North Africa and that the NATO-led military alliance should continue operations in his country as long as the toppled leader's loyalists were killing civilians.

The "mission is far from accomplished," Jibril said. NATO agreed last week to extend its air-and-sea campaign in Libya for up to 90 days.