The rebels have seized large swathes of the North African state, but are deeply divided, lack experience,Thursday's gains in the east broke weeks of stalemate. 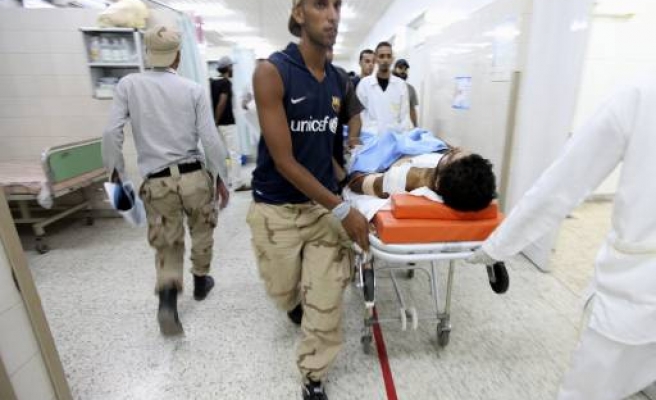 Libyan rebels said they had captured part of the oil town of Brega on Thursday while their forces in the west pushed toward Zawiyah, trying to get within striking distance of Muammar Gaddafi's capital.

Gaddafi is clinging to power despite a near five-month-old NATO air campaign, tightening economic sanctions, and a lengthening war with rebels trying to end his 41-year rule.

The rebels have seized large swathes of the North African state, but are deeply divided and lack experience, and Thursday's gains in the east broke weeks of stalemate.

One rebel spokesman said the opposition had captured the residential districts of Brega but Gaddafi's forces still hold western parts of the town where the oil facilities are located.

"It is liberated. It is under our control now," spokesman Mossa Mahmoud al-Mograbi said of the eastern part of the town.

The residential area where the fighting was taking place is about 15 km (9 miles) east of the oil terminal and sea port.

It was not immediately possible for a Reuters reporter to verify the capture of Brega and rebels have repeatedly claimed to have seized towns, only to be repelled by Gaddafi's forces.

In the western mountains, rebels said they reached the village of Bir Shuaib, some 25 km (15 miles) from Zawiyah, which has unsuccessfully risen up against Gaddafi twice this year.

It lies less than 50 km west of Tripoli, on the main road to Tunisia, which has been a lifeline for Libya but has begun to crack down on rampant smuggling of gasoline.

"We've gone past Nasr village and right now we're about 25 km from Zawiyah," said Faris, a rebel fighter. Rebels prevented reporters from reaching the front to see for themselves.

Rebels in the western mountains do not operate as a single force, as each town has its own command. But when they join forces for major operations they can muster a few thousand men.

Their force is poorly trained and short of heavy weapons, despite a French arms drop earlier this year, and most analysts do not think they are capable of capturing Tripoli.

In an effort to pile economic and military pressure on Gaddafi, more countries are set to announce next week that they will free frozen assets for the rebels, a British official said.

"While it's hard to predict when this will end, it's easy to see the pressure is building on Gaddafi and it is only a matter of time before he's forced to leave power," the official said.

Tightening the economic noose around Gaddafi, Tunisia said on Thursday its troops were patrolling fuel stations to curb the flow of smuggled gasoline into neighbouring Libya.

International sanctions and the effects of Libya's civil war have disrupted normal supplies of fuel to parts of the country under Gaddafi's control, but huge volumes of gasoline are instead being smuggled across the Libyan-Tunisian border.

"The armed forces are now conducting checks at fuel stations in the south of Tunisia ... so that neither Tunisians nor Libyans can fill up with large quantities," Tunisian defence ministry official Mokhtar Ben Nasr told a news conference.

"These checks are aimed at preventing the smuggling of diesel and gasoline to Libya."

The western battle is one of three widely separated rebel fronts against Gaddafi forces. In the east around the ports of Misrata and Brega, fighting had been bogged down in recent weeks while the western rebels have advanced.

The two sides have been battling for months over Brega, 750 km east of Tripoli. The rebels see securing the oil facilities as a tipping point in the war and hope to resume oil exports from there as quickly as possible.

In the west, doctor Nuri Al-Fasi said one fighter had been killed and four wounded on Thursday in the rebel push.

At a nearby field hospital, he looked over a rebel shot in the stomach in the fighting in Nasr. "This is very serious. I don't think he will make it," said al-Fasi, shaking his head.

Dozens of pick-up trucks packed with rebels drove to a staging post a few kilometres behind the front line.

From rebel-held Misrata, east of Tripoli, rebels were fighting to break a partial encirclement by Gaddafi forces, striking south into the nearby village of Tawurgha.

Medical sources said six rebels were killed and 70 wounded in their offensive on Tawurgha, from which Gaddafi's supporters have been firing rockets at Misrata for weeks.

"Our rebels have just liberated Tawurgha. This is great news ... as this means that the rockets of Gaddafi's forces cannot reach Misrata any more," said rebel spokesman Hassan Algallay.

Rebels said the offensive was led in coordination with NATO to protect Misrata from missile attacks. He said NATO asked rebels on Wednesday to paint their vehicles yellow and red.

The offensive comes days after Gaddafi's government accused NATO of killing 85 civilians, including women and children, in an air strike near Zlitan, west of rebel-held Misrata.

Dozens of Libyans protested outside the Hungarian embassy in Tripoli, which has become an unofficial contact point for European nations and the United States, against NATO airstrikes.

Rights group Amnesty International also called on NATO in a statement to "thoroughly investigate" allegations of civilian deaths in the strikes on the village of Majar, close to the front line at Zlitan. NATO said it hit a military target.