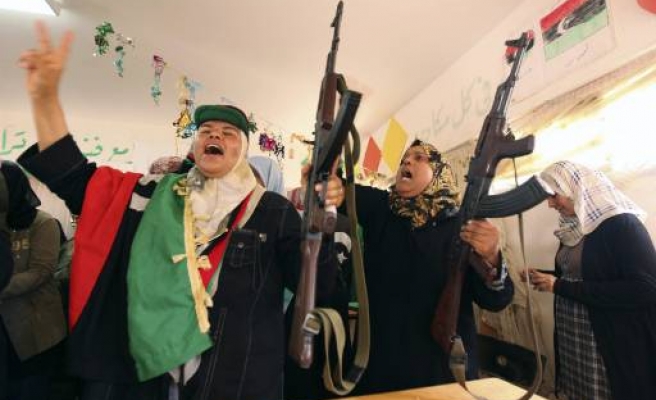 Rebels in Libya's Western Mountains launched an offensive on Thursday against Muammar Gaddafi's troops, as Portugal followed Britain in granting diplomatic recognition to the opposition.

The first dead and wounded from the fresh offensive were brought to Nalut, the nearest rebel town. Hospital sources said they received two dead rebels and 18 wounded, as well as nine wounded Gaddafi soldiers, during the morning.

"We have started attacking Ghezaia with rockets and tanks," rebel spokesman Mohammed Maylud said of a town near the Tunisian border, held by the government since the conflict began and from which it controls a wide area on plains below the mountains.

"The revolutionaries (rebels) closed the crossing this morning after violent fighting broke out in Ghezaia," Ali, who lives on the Tunisian side of the border some 17 km (10 miles) from the town, told Reuters by telephone.

"We are hearing loud explosions in Ghezaia right now. We can also see smoke rising."

At a checkpoint outside nearby Nalut, young rebel fighters sounded optimistic as the fighting began, chanting "God is greatest" as they sped in jeeps to and from the front.

"We can beat Gaddafi now, we have captured more weapons from the Libyan army, mostly rockets and AK-47s," said Mohammed Ahmed, 20, a market trader turned fighter.

Basim Ahmed, a fighter coming back from the front, said rebels had taken control of parts of three villages and many government troops had fled, but this was not possible to verify.

Sustained bombardments could be heard from Nalut, where a captured government soldier, missing a hand, was led to a hospital bed next to wounded rebel adversaries.

"We don't want to keep fighting. Everybody is against us," the soldier, who gave his name as Hassan, told Reuters.

Blood seeped through the bandage bound around the stump of his missing hand but a rebel nonetheless tried to interrogate him, asking him his unit and where he was from.

Rebels have taken swathes of Libya since rising up to end Gaddafi's 41-year rule.

They hold northeast Libya including their stronghold Benghazi, the western city of Misrata and much of the Western Mountains, their closest territory to the capital.

Yet they remain poorly armed and often disorganised.

Despite four months of NATO strikes, they have failed to reach Tripoli and appear unlikely to do so soon.

Ghezaia is of local strategic importance, a base from which government troops attack rebels in the mountains, but if it fell this would not bring the opposition nearer to the capital.

Rebels said about 500 of their fighters were taking part, and estimated about 700 government troops were in Ghezaia.

Gaddafi has scoffed at the rebels' efforts to end his rule and has weathered a rebel advance and NATO air raids on his forces and military infrastructure.

A recent flurry of diplomatic activity has yielded little with the rebels insisting Gaddafi step down as a first step and his government saying his role is non-negotiable.

Western comments that maybe Gaddafi could stay in Libya after ceding power also appeared to fall on deaf ears.

U.N. envoy Abdel Elah al-Khatib visited both sides this week with plans for a ceasefire and a power-sharing government that excludes Gaddafi, but won no visible result.

"Any political initiative that does not include Gaddafi and his sons leaving power and Libya is not worth talking about," Guma al-Gamaty, London-based coordinator for Libya's rebel National Transitional Council (NTC), told reporters on Thursday.

Gaddafi also appeared defiant on Wednesday, urging rebels to lay down their arms or suffer an ugly death.

"We all lead this battle, until victory, until martyrdom," he said in a message aired at a pro-Gaddafi rally in Zaltan, 140 km (90 miles) west of Tripoli.

Ramping up pressure on Gaddafi, Britain expelled his diplomats on Wednesday and invited the NTC to replace them.

Portugal followed suit on Thursday, saying it supported "the Libyan people's aspirations in the construction of a free and democratic society" in a Foreign Ministry statement.

The United States and about 30 other nations have now recognised the opposition, potentially freeing up billions of dollars in frozen funds.

Gaddafi's government said the British move was "illegal and irresponsible" and a "stain on the forehead of Britain".

As usual, lies from Zionists/Imperialists Reuters is continuousness and order of the day.