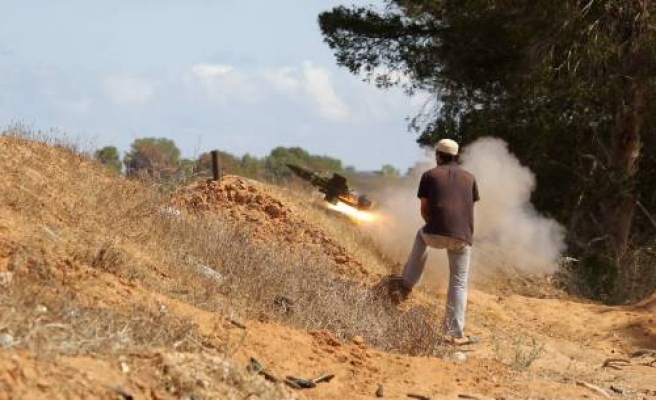 Libyan rebels said on Wednesday they had fought off a counter-attack on their positions around Zlitan, a town they hope will pave the way for an advance on the capital, Tripoli.

Tuesday's assault by forces loyal to Muammar Gaddafi led to fierce street battles that killed at least seven rebels, exposing the fragility of gains by rebels who are fighting on several fronts but are frequently out-gunned and out-manoeuvred.

Five months into their uprising, despite winning increasing international support and enjoying the backing of NATO bombing raids on pro-Gaddafi forces, the eastern-based rebels have failed to make a breakthrough in ending Gaddafi's 41-year rule.

As diplomacy appears to have ground to a halt, rebel pushes around Zlitan and the oil town of Brega, both to the east of Tripoli, and the Western Mountains, near the border with Tunisia, have been overshadowed by reports of divisions and the slaying of their top military chief in shadowy circumstances.

General Abdel Fattah Younes's death, apparently while in the custody of fellow rebels bringing him back from the front line for unspecified questioning, raises the question of stability in the oil-rich country, even if Gaddafi, who has vowed to fight to the death, is defeated.

Rebels have inched towards Zlitan, 160 km (100 miles) east of Tripoli and near rebel-held Misrata, Libya's third-largest city, pushing the frontline to the eastern outskirts.

"We allowed them to get closer to our positions before we fired heavily at them to repel their advances. Our forces have not moved back and we have kept our ground," one local commander told Reuters, asking not to be named.

Another commander said he had lost two men in the fighting but also said the pro-Gaddafi forces had been driven back.

Libyan state television late on Monday aired interviews with people it said were recorded on Monday with people in Zlitan, in which residents denied rebels had taken control of the town.

Seizing Zlitan would give the rebels, who lack the ammunition, discipline and experience of Gaddafi's men, a boost in morale and, potentially, a base to advance on Tripoli.

Libya's conflict has ground on into the Muslim holy month of Ramadan, despite the increasing diplomatic, financial and military backing of the rebels, who are based in the eastern town of Benghazi and have seized about half the country.

Various African and U.N.-led peace initiatives have been launched but delivered no concrete results and Gaddafi's camp said this week that the conflict would continue, even if bombing raids were ended, until the rebels were crushed.

Gaddafi, one of his sons and an intelligence chief are wanted by the International Criminal Court for crimes against humanity during efforts to quash a rebellion that was inspired by successful revolutions in Tunisia and Egypt.

Some say the charges, let alone the sight of former Egyptian leader Hosni Mubarak going on trial in Cairo on Wednesday, will do little to convince Gaddafi to give in.

Supporters of the rebels, however, took hope from the trial as images of Mubarak, lying on a bed in a cage in the courtroom, were beamed across the world.

Several shops in rebel-held Misrata were showing live footage of the trial with some shop assistants glued to the television set.

"Do you think we'll ever see Gaddafi like this one day?" One asked his colleague. "God willing" he replied.

Libyan state news agency Jana said on Wednesday Gaddafi had received a message of congratulations for the start of Ramadan from Syrian President Bashar al-Assad and Bahrain's Prime Minister Sheikh Khalifa bin Salman al-Khalifa, both of whom have also used violence to muzzle growing calls for democracy.

About 30 nations have recognised the Benghazi-based rebel government, the Transitional National Council (TNC), with France this week freeing up over $250 million in frozen Libyan funds, highlighting the potential financial impact of such moves.

But others are concerned that NATO has overstepped its U.N. mandate to protect civilians.

There is also mounting concern the killing of Younes, who had been one of the most senior Gaddafi officers to swap sides, has confirmed sceptics worst fears of a deeply divided anti-Gaddafi camp, pointing to trouble even if he was removed.

Younes's powerful tribe vowed on Tuesday to find justice themselves for his suspicious death if the rebel leadership failed to do so.

"The way he was killed looks like a betrayal, so until now we are trying to calm and control the youth of the tribe, but we don't know what could happen," one of Younes's sons said.