Libya's rebel National Transitional Council, recognised by many of the NATO nations whose air power is supporting their assault, denied any kind of negotiation with Gaddafi to resolve the six-month-old conflict. 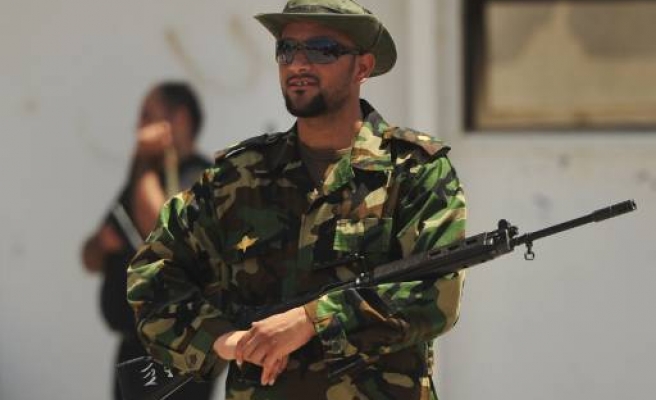 Rebels fighting to topple Muammar Gaddafi scorned reports of secret talks with the Libyan leader on Monday as their forces fought to secure gains and the United States said Gaddafi's days were numbered.

After 41 years of supreme power in his oil-rich desert state 69-year-old Gaddafi was isolated in the capital Tripoli, with reinvigorated rebel forces closing in from the West and South.

Libya's rebel National Transitional Council (NTC), recognised by many of the NATO nations whose air power is supporting their assault, denied any kind of negotiation with Gaddafi to resolve the six-month-old conflict.

"The NTC would like to affirm that there are no negotiations either direct or indirect with the Gaddafi regime or with the special envoy of the United Nations," said NTC leader Mustafa Abdel Jalil.

Gaddafi must step down and leave Libya, he said. "It is unthinkable to hold any negotiations or talks that disregard this basic principle."

In Washington, U.S. Defense Secretary Leon Panetta said Gaddafi's forces had been thrown back onto the defensive, and reports that a senior figure in the Libyan security apparatus had defected indicated the regime was cracking.

"Gaddafi's forces are weakened and this latest defection is another example of how weak they've gotten," Panetta said.

"I think the sense is that Gaddafi's days are numbered," Panetta said at event with Secretary of State Hillary Clinton.

At a news conference broadcast by Libyan state television, government spokesman Moussa Ibrahim dismissed reports that Gaddafi's forces were on the run but acknowledged fighting in several locations the rebels say they have already captured.

"Be aware of the media campaign which is trying to make the rebels bigger than they are," he told Libyan reporters. "Some foreign politicians have said this regime's days are finished and it has weeks left. They have been saying this for six months and we are still here."

Rebels fighting to topple Gaddafi seized two strategic towns near Tripoli over the past two days, cutting the city off from its supply lines and leaving the Libyan leader with a dwindling set of options if he is to stay in power.

However, pro-Gaddafi forces were mounting a fight-back in Zawiyah, west of Tripoli. Snipers in tall buildings were picking off rebel fighters, and salvos of rockets landed in the town.

A long-range Scud missile was used for the first time in the war, launched on Sunday near Gaddafi's now isolated home town of Sirte 500 km (310 miles) east of Tripoli.

It exploded in the open desert between the rebel-held towns of Brega and Ajdabiyah, injuring no one, said a U.S. official.

Analysts said this was an act of desperation. "It's an obvious sign that the regime's back is to the wall," said Shashank Joshi of Britain's Royal United Services Institute.

"Gaddafi troops are using his last gun. He's crazy," said Mohammad Zawawi, media director for rebel forces. "We're scared he'll use chemicals. That's why we're trying to end this war and we hope to end it with the least number of casualties."

Analysts say the rebel strategy is to isolate Tripoli and hope the government collapses, but they say it is also possible Gaddafi will opt to stage a last-ditch fight for the capital.

In a barely audible telephone broadcast by state television early on Monday, Gaddafi, speaking from an undisclosed location, urged followers to liberate Libya from rebels and NATO.

"The blood of martyrs is fuel for the battle," he said.

As he spoke rebels were making their most dramatic advances in months of fighting, shifting the momentum in a conflict that had been largely static and was testing the patience of NATO.

Rebel forces southwest of Tripoli surged forward at the weekend to enter Zawiyah about 50 km (30 miles) west of Tripoli straddling the main highway linking the capital to Tunisia.

A day later, they said they had taken the crossroads town of Garyan, which controls the highway south from Tripoli linking it to Sabha, a Gaddafi stronghold deep in the desert.

"Gaddafi has been isolated. He has been cut off from the outside world," a rebel spokesman said.

Tripoli officials deny the rebels control Zawiyah, and say their forces are preparing to drive "armed gangs" from Garyan.

Rebels on the outskirts of Zawiyah said most of Gaddafi's forces had pulled out of the town, but left behind snipers who made it dangerous for the anti-Gaddafi fighters to move around.

A Reuters reporter saw six soldiers at a makeshift prison. They were blindfolded and made to kneel facing and rebels walked by, shouting at them and slapping them on the head.

"They were firing at us," said Abdel-Muiz Ramadan, 20, a rebel fighter. "We captured one of them and he gave us the location of the others."

Medical workers at one of the town's hospitals said 20 rebel fighters and civilians were killed on Monday.