To the east of Sirte, scores of NTC pickup trucks mounted with anti-aircraft guns, and ferrying fighters, advanced to within 10 km of the city, Reuters journalists said. 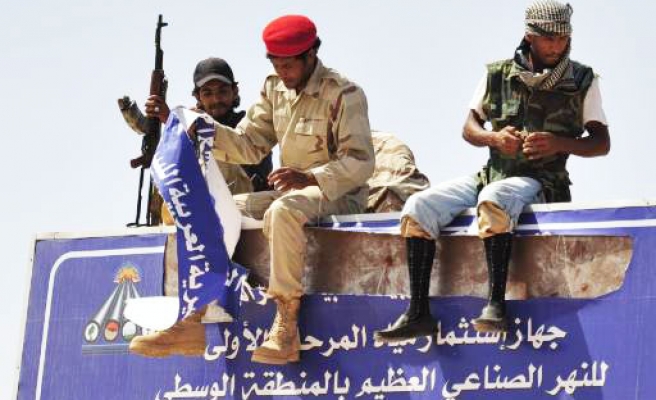 While anti-Gaddafi forces which have advanced from the west held their ground, firing from two tanks positioned about 2 km (2,000 yards) from the centre of the sprawling desert town, a sharp push forward on the eastern front by scores of armed pick-up trucks raised spirits among the attackers.

Sirte, where NATO aircraft hit targets on Sunday, lies between Tripoli and the eastern city of Benghazi, both now held by the National Transitional Council (NTC), whose rebel fighters overran the capital five weeks ago after six months of fighting.

Taking Sirte would be a huge boost for the NTC as it tries to establish credibility as a government able to unite Libya's fractious tribes and regions, and a blow for Gaddafi, widely believed to be in hiding somewhere in Libya.

Humanitarian organisations are also anxious to see an end to the fighting in the final bastions of his supporters. They have raised the alarm over conditions for civilians cut off in Sirte and in Bani Walid to the south.

To the east of Sirte, scores of NTC pickup trucks mounted with anti-aircraft guns, and ferrying fighters, advanced to within 10 km (six miles) of the city, Reuters journalists said.

"There's heavy resistance on the outskirts of Sirte and there are Gaddafi snipers but God willing we can enter Sirte by tonight," NTC fighter, Emad al-Amamy, told Reuters. It is a hope that has been disappointed many times in recent weeks, however.

In the west of the city, NTC forces pulled back on Sunday, saying it was to make way for NATO bombing. Fighting there was less intense than combat seen on Saturday as the western force drove to within a few hundred metres (yards) of the city centre.

Scores of civilians in cars laden down with personal belongings continued to stream out of the town to both the east and west. NTC fighters checked them, looking for wanted figures among those who were, and may still be, loyal to Gaddafi.

"We are very concerned about the people inside and near Bani Walid and Sirte," Georges Comninos, who heads International Committee of the Red Cross (ICRC) in Libya, said in a statement.

"Food reserves and medical supplies are reportedly running short in both cities. We are receiving many appeals to help the wounded and come to the aid of civilians generally".

NTC fighters and people who have fled Sirte have alleged that pro-Gaddafi fighters were trying to prevent civilians from getting out of the city, effectively using them as human shields.

A man who described himself as a hospital doctor in Sirte told Reuters by telephone it was NTC forces who were making civilians suffer. Wounded people were dying because medical supplies were running out and the hospital had been hit by shellfire, he said. The man, who gave his name as Abdullah Hmaid, used a mobile telephone also used recently by Gaddafi's spokesman, Moussa Ibrahim, who is a native of Sirte.

Gaddafi loyalists showed they were still a threat by launching an attack on Sunday on the desert oasis town of Ghadames, on the border with Algeria, NTC officials said.

It underlined the fragility of the NTC's grip even on parts of the country nominally under its control. The town, about 600 km southwest of Tripoli, is near a border crossing that Gaddafi loyalists have used to flee into Algeria. Its old town, an intricate maze of mud walls, is a UNESCO world heritage site.

"These militias have attacked our people in Ghadames city," NTC military spokesman Ahmed Bani said on Sunday, adding that NTC fighters expected to be in full control there in "a matter of days".

The NTC also said on Sunday that it had found a mass grave containing bodies of over 1,000 people killed by Gaddafi's security forces in a 1996 massacre of prison inmates in Tripoli.

The mass grave was the first physical evidence found so far of the Abu Salim prison massacre, an event that was widely spoken of in Libya but covered up for years, creating simmering anger that ultimately helped bring about Gaddafi's downfall.

Survivors have told human rights groups that guards lined up inmates in the courtyards at dawn on June 29, 1996, and security men standing on the prison rooftops shot them down.

The uprising that toppled Gaddafi was ignited by protests linked to the Abu Salim massacre. In February, families of people killed there demonstrated in Benghazi to demand the release of a lawyer who had been representing them. Against the backdrop of the overthrow of authoritarian rulers in both Egypt and Tunisia, the protests gathered pace and won Western backing.

However, despite taking the capital in August, the new rulers say they cannot begin the process that would lead to elections until Sirte and Bani Walid fall. Wrangling over ministerial portfolios has prevented them from forming a caretaker government, deepening uncertainty over Libya's future.