Jalil said, "the head of the armed cell, to which the accusing finger points and a member of which carried out this individual cowardly crime, has been arrested." 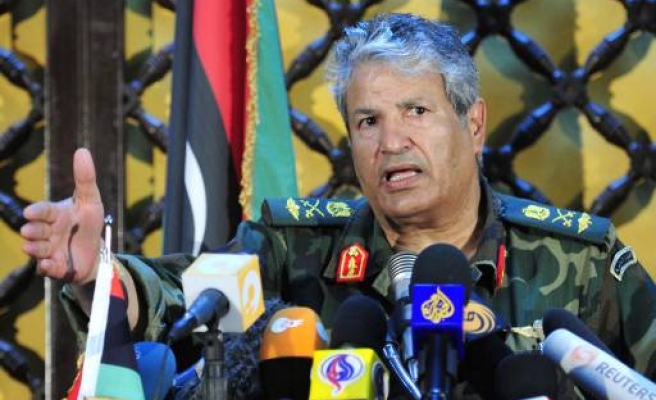 Libya's rebel military commander was shot dead in an incident that remained shrouded in mystery, dealing a blow to rebel forces labouring in a campaign to topple Muammar Gaddafi.

Rebels said Abdel Fattah Younes, long in the veteran Libyan leader's inner circle before defecting in February, was shot by assailants on Thursday after he had been summoned from the battlefield for unspecified talks.

Some analysts thought Gaddafi agents may have killed him, others that his own side had done so, revealing deep divisions between Gaddafi defectors and those who never worked with him. Neither side in the conflict clarified the matter.

The killing coincided with a new rebel offensive in the west and further international recognition for rebels, which they hope will help unfreeze billions of dollars in Libyan funds.

The rebels did not say who killed Younes or where, and said on Thursday they did not yet have his body.

But on Friday, weeping relatives and supporters brought his coffin into the main square of the rebel stronghold of Benghazi to mourn him, and vowed allegiance to remaining rebel leaders.

"We got the body yesterday here (in Benghazi), he had been shot with bullets and burned," Younes's nephew, Abdul Hakim, said, crying as he followed the coffin through the square.

"He had called us at 10 o'clock (on Thursday morning) to say he was on his way here."

Officials would not give details of why Younes was recalled on Thursday to Benghazi from the front line near the oil port of Brega for questioning. Rumours had circulated in Benghazi that he had held secret talks with the Gaddafi government.

"If the rumours that General Younes was feeding information to Gaddafi were there then it would make sense that some rogue elements might attempt to assassinate him," said Alan Fraser, an analyst with London-based risk consultancy AKE.

Rebel defence minister Omar Hariri told Reuters his death was still being investigated and his loss would be great.

Ahead of Younes's funeral in Benghazi on Friday, relatives vowed allegiance to the rebels' political leader.

"A message to Mustafa Abdel Jalil: We will walk with you all the way," nephew Mohammed Younes told hundreds of mourners in the main square. "Libya first, until God gives us victory or chooses us as martyrs." Other family members were beside him.

Nephew Hakim said another coffin brought into the square by a crowd of men, some in military fatigue and some with rifles, held the body of one of two bodyguards killed with Younes.

He gave no further details of what had happened to his uncle before the procession moved on.

Analysts said it was hard to say if Younes had been killed by Gaddafi agents, as rebels have implied, or by his own side.

The latter would show deep and damaging divisions within the rebel movement that could hamper their progress and embarrass their Western backers.

"It seems this was an assassination operation organised by Gaddafi's men," said London-based Libyan activist Shamis Ashour. "There certainly was treason, a sleeping cell among the rebels."

"The alternative, which is equally possible," said another analyst, Shashank Joshi, "is summary execution by rebels, an internal act of decapitation by the rebels themselves."

Joshi, of London's Royal United Services Institute, said this explanation would just highlight divisions in rebel ranks already known to exist, and would put a question mark on the rebels' reliability as partners for Western states.

"All these things would humiliate governments that have supported the rebels. Particularly Britain, which came late to the fray, partly for reasons like this," he said.

Witnesses said the killing was greeted with jubilation by Gaddafi's supporters in the Libyan capital Tripoli.

Younes, from eastern Libya where the rebels are strongest, was Gaddafi's interior minister but swapped sides to become the military chief in the rebel Transitional National Council (TNC), whose political leader Jalil announced his death.

Jalil said the killers were still at large but added:

"The head of the armed cell, to which the accusing finger points and a member of which carried out this individual cowardly crime, has been arrested." He gave no details.

Younes, who was involved in the 1969 coup that brought Gaddafi to power, was not trusted by all rebel leaders due to his previous role in cracking down on dissidents.

His death is likely to be a serious setback to a movement that has won the backing of some 30 nations, most recently Britain and Portugal, but has struggled to advance on the battlefield.

Hariri, the rebel defence minister, visited the front line in western Libya on Friday. In an interview with Reuters at a nearby checkpoint he said Younes's death was still being investigated. "Of course this will have an impact on the rebels, after all we have lost a key leader," he said. "But they will recover, and there will be other leaders."

Rebels took swathes of Libya early on after rising up in February to end Gaddafi's 41 years of domination in the oil-producing North African state.

They said they had seized several towns in the Western Mountains on Thursday but are yet to make a major breakthrough.

A rebel commander near Ghezaia told Reuters on Friday that around 100 insurgents had taken control of the town, from which Gaddafi forces had dominated plains below the mountains.

Reuters could not go there to confirm the report as rebels said the area could be mined. But looking through binoculars from a rebel-held ridge near Nalut, reporters could see no sign of Gaddafi's forces in Ghezaia.

Another rebel commander said the settlements of Takut and Um al Far had also been seized.

With prospects of a negotiated settlement fading, the five-month civil war will grind on into the Muslim holy month of Ramadan in August.