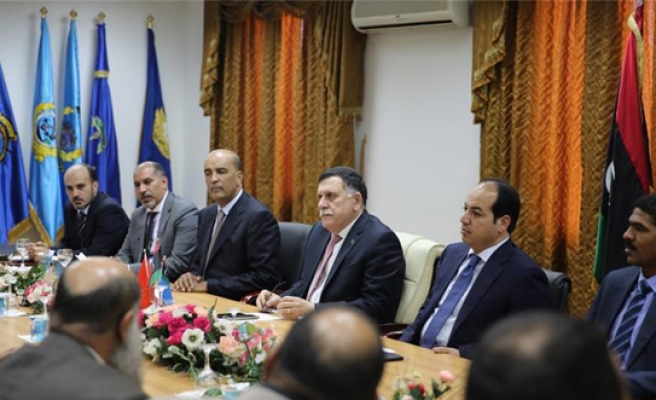 Libya's unity government received a boost to its authority Thursday, as 10 cities formerly under control of a rival militia-backed Tripoli body pledged support to the newly arrived prime minister-designate.

The arrival of UN-backed Fayez al-Sarraj at a naval base on Wednesday drew fury from the non-recognised authority in charge of Tripoli, which demanded he leave or surrender.

But 10 coastal cities in the west of the country called on all Libyans to "support the national unity government" in a major blow to the unrecognised authority that is refusing to give up power.

The announcement came in a statement on the official Facebook page of the Sabratha municipality, which also asked the government to "put an immediate end to all armed conflicts across Libya".

Gunmen stormed the headquarters of a Libyan television station overnight, apparently in support of the new government, but the capital appeared calm on Thursday.

Banks and shops were open, police were posted on the streets and flights had resumed at Metiga airport after being suspended the day before "for security reasons".

"The reactions have been better than we hoped for. The situation is good," an adviser to Sarraj told AFP, speaking on condition of anonymity.

The international community hailed the new government's arrival as a crucial step in restoring order to Libya, which has been wracked by chaos since the NATO-backed overthrow of Moamer Kadhafi in 2011.

Formed under a power-sharing deal agreed in December, the unity government is meant to take over from rival groups running the country.

Libya has had two administrations since mid-2014 when the militia alliance overran Tripoli, setting up its own authority and forcing the internationally recognised parliament to flee to the country's remote east.

International leaders, increasingly alarmed by the rise of extremists and people-smugglers in the impoverished North African state, have called on Libya's political rivals to back the unity government.

EU member states on Thursday agreed to impose sanctions on three Libyans for obstructing the formation of Sarraj's government.

One European source said the measures comprise "a ban on travelling in the European Union and a freeze on assets in the EU".

Sarraj held talks with officials including lawmakers and local mayors on Thursday and was set to meet the governor of Libya's central bank to discuss the nation's crumbling economy.

Around 300 people gathered in the centre of Tripoli, waving banners and flags in support of the unity government.

But the prime minister-designate still faces an uphill battle, with the Tripoli government on Wednesday insisted he leave the capital or "hand himself in".

Italy's Foreign Minister Paolo Gentiloni, who spoke by phone with Sarraj, said Rome would authorise urgent food and medical aid to be distributed by the new administration.

A total of 860 tonnes of aid including food and medicine for 30,000 patients would be handed out, his ministry said.

Western powers are especially worried by the growth of the ISIL group in Libya.

The extremist organisation has seized control of Kadhafi's coastal hometown of Sirte and launched a wave of attacks, both against rival Libyan forces and across the border in Tunisia.

Western countries are considering military action against the extremists in Libya but want a unity government to request help first.