The election commission said after voting ended that 1.6 million of some 2.8 million registered voters had cast their ballots, a turnout of just under 60 percent. 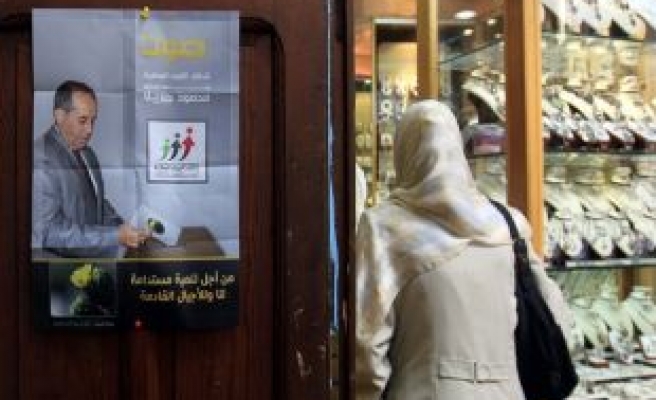 Libyans, relieved that their first free national election in 60 years had survived violence and protests, celebrated the chance to draw a line under Muammar Gaddafi's dictatorship and forge a brighter future for their North African country.

While two deaths were reported as anti-election protesters sought to disrupt Saturday's poll which they reject as a sham, the interim Libyan government and Western backers of last year's uprising hailed it as an early triumph for democracy.

No clear outcome is expected until Monday and questions remain on how the new 200-head national assembly will function, the importance of Islamic groups within it, and how growing demands for more autonomy in the east are to be addressed.

But the initial mood was one of jubilation as revellers lit the night sky over the capital Tripoli with fireworks while in the eastern city of Benghazi people celebrated by firing rocket-propelled grenades in the direction of the sea.

Even in Gaddafi's hometown of Sirte, which saw some of the worst fighting and damage in last year's NATO-backed uprising to end his 42-year rule, there was relief that the vote had gone smoothly.

"Allahu akbar (God is greatest), this is the freedom era - for the first time Sirte is free," chanted a local woman as she celebrated with her family.

The election commission said after voting ended that 1.6 million of some 2.8 million registered voters had cast their ballots, a turnout of just under 60 percent.

"The first winner is the Libyan people," commission chairman Nuri Al-Abbar told a late-night news conference on Saturday, when repeatedly pressed for details of who had won.

In Washington, U.S. President Barack Obama made clear he saw the vote as vindication of a decision to back a NATO air assault which its critics denounced as the latest example of Western meddling in the Arab world.

"The United States is proud of the role that we played in supporting the Libyan revolution and protecting the Libyan people, and we look forward to working closely with the new Libya," he said in a statement.

While authorities boosted security to deal with threatened attacks by the ex-rebel militias which still wield power, it was ordinary Libyans armed with everything from clubs to automatic weapons who in many cases stood guard at polling stations.

"This was crisis management more than an election process, but they managed the crisis very well," said International Crisis Group's (ICG) Claudia Gazzini of pre-vote attacks on election facilities that claimed at least one life.

But while the election itself went more smoothly than many had expected, the road ahead could still be rocky.

The storming of four voting centres by protesters in Benghazi, cradle of last year's uprising, underlined that eastern demands ranging from greater political representation for the region to all-out federalism will not go away.

Local gunmen demonstrated their grip on the eastern oil terminals from which the bulk of Libya's oil exports flow by blocking flows from three main ports a day before the vote.

"I think one should distinguish that willingness to disrupt the process from the much wider feeling in the east that the east has been marginalised," U.N. envoy Ian Martin said of the local feeling that post-Gaddafi authorities in Tripoli have not addressed its economic or welfare needs.

Many easterners were furious that their region, one of three in Libya, was only allotted 60 seats in the new assembly that will elect a prime minister and cabinet - compared to 102 in the western region that includes Tripoli.

In a last-minute bid to appease them, the interim government last week stripped the assembly of its task of naming the panel that will write Libya's new constitution and ruled that Libyans themselves would pick it in yet another election.

But the move was either ignored or dismissed as trickery by easterners who suspect they are being short-changed in the run-up to the full parliamentary elections to be held in 2013.

"We don't have a law to control political parties, we don't have a constitution yet. How can they consider this a legitimate congress?" said 25-year-old student Abdelwahab Al-Ghazali in Benghazi, explaining why he boycotted the poll.

ICG's Gazzini said the eastern grievances would have to be addressed, even if a move to all-out federalism was unlikely.

"The government recognises there is an overall unhappiness in the east and they are willing to address that issue. It will probably be termed more as de-centralisation," she noted.