Libyans face Ramadan of shortages, fear as war drags on

As Libya's civil war churns on into Ramadan with no end in sight, Libyans on both sides of the conflict say shortages, high prices, rising summer temperatures. 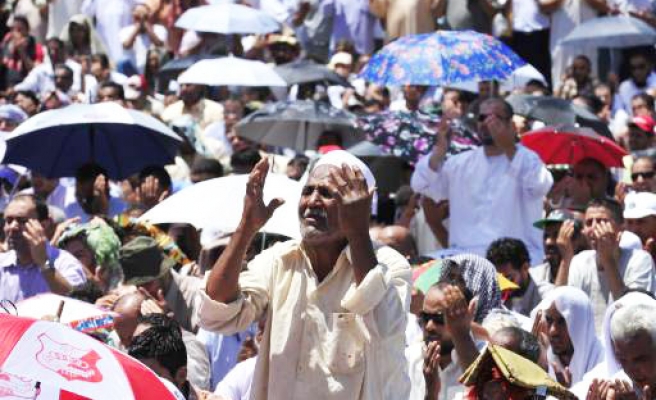 In rebel-held Misrata, the vegetable market is half empty; shoppers fret over shortages and soaring prices. A few miles away in Zlitan, controlled by Muammar Gaddafi, Libyans worry about sanctions and NATO strikes.

As Libya's civil war churns on into Ramadan with no end in sight, Libyans on both sides of the conflict say shortages, high prices, rising summer temperatures and worry about loved ones fighting on distant fronts could mar the Muslim fasting month.

Misrata's market is just a collection of makeshift stalls, built after the original market was destroyed in fighting. Given that Misrata is marooned in the Gaddafi-held west and only able to bring in supplies by sea, locals are resigned to shortages.

"Dates do not have a long shelf life. Our best dates are in the south," said Mohammed Abu Zreeba of the high-energy fruit popular among Muslims breaking the dawn-to-dusk fast.

"This is far from us and cannot reach us by sea. Cars and transportation cannot get here."

Just a few miles west of Misrata, in the Gaddafi-held town of Zlitan, locals said sanctions and air strikes were biting.

The Libyan government recently bussed foreign journalists to Zlitan to see what they said were government food warehouses it said were struck by planes from NATO, which says it strikes only military targets.

Sacks of flour and rice and boxes of canned tomatoes and oil that were destined to be sold to Libyans at reduced prices were burned or sat surrounded by rubble.

"We use this food for Ramadan and now it is destroyed," nearby resident Mohamed Muftah said angrily. "They want to starve us."

Rebels fighting in the Western Mountains region, near Libya's border with Tunisia, were worried about fighting without food and water in the searing heat.

"Ramadan will be very tough for us. We're already struggling now. The weather will be very hot and we won't have the energy to fight while we are fasting," said Abdelbadr Adel, 19, a rebel fighting in the Western Mountains.

"It is now more important than ever that NATO help us beat Gaddafi. We know Gaddafi's men will not be fasting."

The United Nations has warned of fuel and cash shortages on the eve of Ramadan, when families and friends typically gather to break their fast together with hearty meals. Long petrol lines snake down highways near the capital Tripoli.

Ahmed al-Kafi, a retired diplomat who lives in the city of Sabratha west of Tripoli, said the fuel shortage would prevent him from visiting relatives and friends as he would normally do.

Zlitni said the country still has significant "contingency reserves,' but it was not clear how long the government, unable to access assets frozen abroad, could afford such support.

Abdussalam bin Sulaiman, a Libyan journalist, said Ramadan this year would be overshadowed by the air strikes that rock Tripoli and other areas virtually every day.

"We hope but that by the time Eid al-Fitr comes around, this obsession with death will be finished," he said, referring to the feast that marks the end of the fast.