Doctors in the encircled city report many war-wounded have been brought for treatment, but the hospital lacks anesthetics and basic medicines, Medecins Sans Frontieres said. 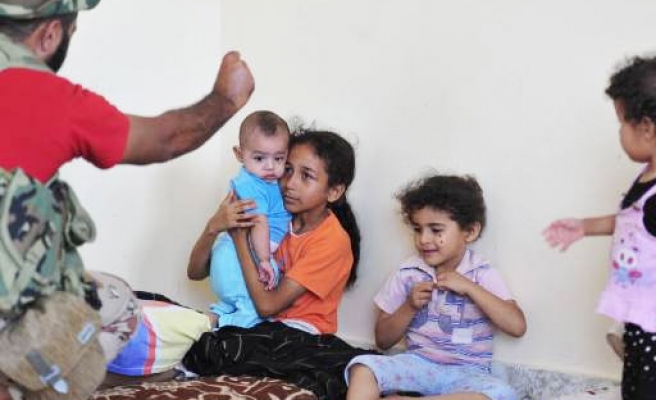 Thousands of civilians are streaming out of Muammar Gaddafi's besieged home town of Sirte, where a humanitarian disaster looms amid rising casualties and shrinking supplies of water, electricity and food, major aid agencies said on Wednesday.

Doctors in the encircled city, one of the last two bastions of support for the deposed leader, report many war-wounded have been brought for treatment, but the hospital lacks anesthetics and basic medicines, Medecins Sans Frontieres (MSF) said.

"If the situation continues for a few more days or weeks, it will be catastrophic. Already the doctors in the hospital can't do their work properly, and if it persists, the situation will become dramatic," Dr. Mego Terzian, head of emergency programmes for MSF-France, told Reuters.

Doctors in Sirte have contacted an MSF team based in Misrata seeking delivery of medical supplies, but the agency has been unable to reach the city of 100,000 due to heavy fighting, he said, adding that a handful of wounded are evacuated to Misrata each day.

"They said they hospital was overwhelmed with wounded. There are other kinds of emergencies -- pediatric, gynecological and patients with chronic diseases who are not receiving treatment.

"They told us of huge difficulties, a lack of electricity, water and basic medicines to run the emergency room, including anesthetics, antibiotics, analgesics, and blood bags," he said.

The water and electricity shortages were also affecting the general population, he added.

Forces of the interim National Transitional Council (NTC) had "discouraged, even forbidden" MSF from sending its aid workers into Sirte citing insecurity, according to Terzian.

"We couldn't take the risk. We suggested to the Libyan doctors in Sirte that they could come out to collect supplies, but they have not been able to. We are looking into access by the sea, but I'm not very optimistic that we will succeed."

Intense sniper and artillery fire from forces loyal to Gaddafi holed up in Sirte kept fighters with Libya's new rulers at bay on Wednesday. Sirte is also under aerial attack from NATO.

More and more people are fleeing the besieged town, with the exodus increasing sharply in the past few days, the International Committee of the Red Cross (ICRC) said.

"We can't assess the magnitude of the humanitarian problem, but there obviously is a very serious one which is of concern," ICRC spokesman Steven Anderson told Reuters.

"We see more and more displaced, really thousands leaving Sirte to the west and to the east, which is an indication of the situation," he said.

The ICRC, an independent aid agency working alongside Libyan Red Crescent volunteers, has stepped up its operations but has been unable to enter Sirte due to the fighting.

It has brought relief supplies to 10,000 people around Sirte, either refugees who have either fled the city or needy locals living in nearby villages, Anderson said. They include more than 1,200 displaced staying in a desert area between Harawa and Sirte.

"A high percentage of this group of people are women, children and elderly living in difficult hygiene conditions without much water. Some have developed fever and diarrhoea due to their vulnerable state and they lack access to health care.

"They said that those still in Sirte lack water and electricity and the food reserves are dwindling," he added.