Residents escaping said hundreds were still trapped in Sirte. They spoke as pro-NTC fighters fired test shots to alert pro-Gaddafi forces holed up inside the city of their presence. 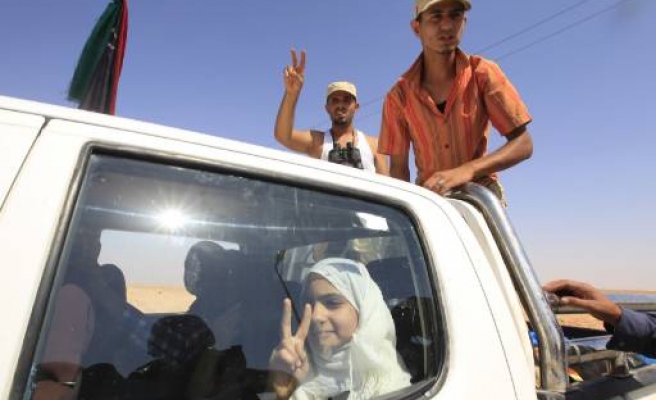 Hundreds of families fled Muammar Gaddafi's birthplace of Sirte on Monday as fighters sent by Libya's new rulers to capture the city rolled up with huge rocket launchers and artillery guns.

National Transitional Council (NTC) forces have been struggling to wrest Sirte from Gaddafi loyalists for several days and humanitarian groups have voiced alarm at the reported conditions within the coastal city, cut off from the outside.

Residents escaping said hundreds were still trapped in Sirte. They spoke as pro-NTC fighters fired test shots to alert pro-Gaddafi forces holed up inside the city of their presence.

"There's no electricity, no phone coverage. Nothing," resident Ibrahim Ramadan said, standing by a car packed with his family as he fled on the fifth day of fighting.

"There's just some water really, but nothing else apart from that," he said as interim government forces handed out juice to civilians at a checkpoint and rifled through their belongings to check for weapons.

Ramadan, who acts as a community leader, estimated that around one third of Sirte's roughly 70,000 residents had left.

Sirte, 450 km east of Tripoli, is one of the last strongholds of pro-Gaddafi forces along with the besieged desert town of Bani Walid and Sabha, deep in the remote south.

Gaddafi turned his birthplace from a sleepy fishing village into a bustling quasi-capital that hosted the country's toothless parliament and international meetings.

Interim government forces amassed on the western outskirts of Sirte on Monday and exchanged scores of rockets with pro-Gaddafi fighters as NATO jets roared overhead.

Residents said homes had been destroyed and cars smashed to pieces as disorder spread across the city.

"People are fed up. There are explosions going off everywhere and you don't know where the bullets will come from next," resident Abubakr said as he made his way out of the city.

"Look at this!" he said, pointing at a bullet hole in his car's windshield. "Bullets are coming down from above. People are just firing randomly."

The pro-NTC fighters, who were forced into retreat on Saturday after storming the city, said they were holding off advancing deeper into Sirte or firing heavy artillery for now because they wanted to give residents a chance to leave.

"The problem is that there are some (Gaddafi) brigades preventing them from leaving," pro-NTC soldier Sadiq Atman said as his fellow fighters pieced together an anti-aircraft machine gun on the back of a pickup truck.

"If these families were able to get out, this would be a proper war," he said.

His colleagues on the city's western outskirts said they were on the lookout for any suspected Gaddafi supporters among the fleeing residents.

One pro-NTC fighter pulled aside four young men for questioning after he said he had found an anti-aircraft bullet in their car.

"There is no weapon inside, but if they have this, there has to be a story," he said, holding up the bullet.

Residents edged towards the checkpoint in their vehicles, some looking visibly distressed, while others chanted anti-Gaddafi slogans and waved Libya's new flag.

"Get out, messy-haired one!" a group of children sang as they leaned out of a car, using a popular insult levelled at the former strongman, while other civilians chanted "Free Libya!"