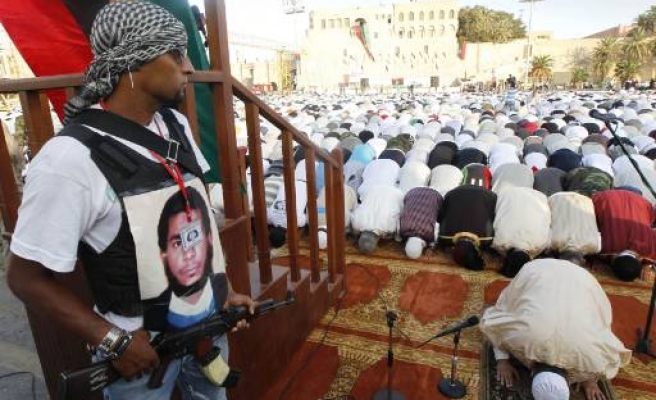 Libyans delighted at Muammar Gaddafi's downfall celebrated the end of Ramadan feast on Wednesday, even though the ousted leader remains on the run and forces loyal to him are defying an ultimatum set by Libya's interim council.

Fighters on rooftops guarded against any attack by Gaddafi loyalists and sniffer dogs checked cars. Even the interim interior minister, Ahmed Darat, was searched.

In festive mood, parents took photos of their children wearing new clothes for the Eid al-Fitr holiday that follows the Muslim Ramadan fasting month. Some waved flags of the Libyan monarchy that Gaddafi overthrew in a military coup 42 years ago.

"Gaddafi made us hate our lives ... We come here to express our joy at the end of 42 years of repression and deprivation."

Fatima Mustafa, 28, a pregnant woman wearing a black chador, said: "This is a day of freedom, a day I cannot describe to you. It's as if I own the world. I'm glad I haven't given birth yet so my daughter can be born into a free Libya."

But the war is not over yet, with Gaddafi on the run and his loyalists defying an ultimatum set by Libya's interim council.

Fighters pushing from east and west towards Gaddafi's home town of Sirte have paused, observing an effective truce until a surrender deadline set by their leaders expires on Saturday.

NATO said its planes bombed Gaddafi forces near the coastal city on Tuesday, targeting tanks and other armoured vehicles as well as military facilities. They also hit targets in the area of Bani Walid, another Gaddafi stronghold 150 km (100 miles) southeast of Tripoli. Anti-Gaddafi fighters said the same day that they had advanced to within 30 km of the desert town.

Their interim leaders, trying to heal a nation scarred by Gaddafi's cruelly eccentric ways, may want United Nations help in setting up a new police force, but see no role for international peacekeepers or observers, a U.N. official said.

"They are very seriously interested in assistance with policing to get the public security situation under control and gradually develop a democratically accountable public security force," Ian Martin, special U.N. envoy for post-conflict planning in Libya, said at the United Nations in New York.

"We don't now expect military observers to be requested," he said. "It's very clear that the Libyans want to avoid any kind of military deployment of the U.N. or others."

The National Transitional Council (NTC), keen to assert its grip and relieve hardship after six months of war, won a $1.55 billion cash injection when the U.N. sanctions committee released banknotes in Britain in frozen Gaddafi accounts.

France has asked the committee to unfreeze 1.5 billion euros ($2.16 billion) of Libyan assets in France, a French government source said on Wednesday, adding that Libya has 7.6 billion euros of assets parked in French banks.

The source also said that Russia and China, which have not formally recognised the NTC, would send representatives to an international "Friends of Libya" conference in Paris on Thursday to discuss support for political and economic rebuilding.

European Union sanctions against six Libyan ports, four oil companies and more than a dozen other entities could be lifted as soon as Friday, EU diplomats in Brussels said.

The EU's 27 governments reached a preliminary agreement on Wednesday to ease the restrictions on 28 Libyan entities and a final agreement was expected on Thursday, diplomats said.

"The decision is to enter into force on Friday," one EU diplomat said, speaking on condition of anonymity.

Libya's NTC, which plans a new constitution before holding elections, is also trying to revive vital oil and gas exports.

Despite the loss of life and shortages of fuel, power and water that Tripoli has endured since Gaddafi's fall, worshippers in Martyrs' Square were mostly ebullient about the future.

"We mourn the dead. Thank God we got rid of the despot after 42 years," said Hatem Saleh, in his 20s. "We thank God we're liberated now, we're free. The tyrant is out, no more killing."

Fatmeh Mustafa, a veiled 28-year-old, said she could not wear her Islamic veil in public under Gaddafi, who viewed Islamists as a threat. "Security agents regularly came to our mosques and searched us. Men with beards were targeted. We were the most repressed section of society under Gaddafi," she said.

Nouri Hussein, 42, an engineer, said he was glad Gaddafi was gone, but feared the guns in the hands of unruly fighters.

"There is apprehension about what next. The rebels should not be blinded with the ecstasy of victory," he said.

Darat, the interior minister, said new security forces would absorb some of the fighters. "Our goal is to implement justice for everybody, including Gaddafi loyalists," he added.

NTC leaders have told their forces to treat prisoners with respect -- in contrast with the reported killing and torture of detainees by Gaddafi's forces -- but Amnesty International said its staff had seen anti-Gaddafi fighters threaten and detain wounded opponents, notably black Libyans and foreigners.

"The council must do more to ensure that their fighters do not abuse detainees, especially the most vulnerable ones such as black Libyans and sub-Saharan Africans," Amnesty's Claudio Cordone said in a statement after one incident in Tripoli.

"Many risk reprisals as a result of allegations that Gaddafi forces used 'African mercenaries' to commit widespread violations during the conflict," the lobby group added.