"Let it be a long battle. We will fight from place to place, from town to town, from valley to valley, from mountain to mountain," Gaddafi said. 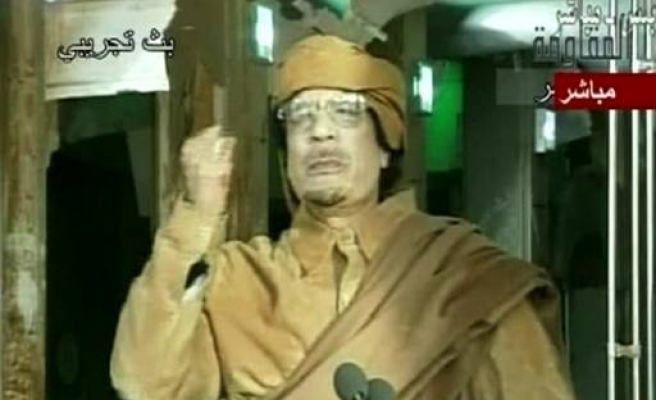 Muammar Gaddafi urged his supporters to fight on as world leaders freed up billions of dollars to help Libya's new rulers rebuild a nation torn by 42 years of one-man rule and six months of civil war.

"Let it be a long battle. We will fight from place to place, from town to town, from valley to valley, from mountain to mountain," Gaddafi said in a message relayed by satellite TV on the anniversary of the coup that brought him to power in 1969.

"If Libya goes up in flames, who will be able to govern it? Let it burn," he said, speaking from hiding.

In further comments broadcast later, he vowed to prevent oil exports. "You will not be able to pump oil for the sake of your own people. We will not allow this to happen," Gaddafi said. "Be ready for a war of gangs and urban warfare."

Amid conflicting reports of where the 69-year-old man might be, a commander in the forces of the new ruling council said he had fled to a desert town south of the capital, one of several tribal bastions still holding out.

Seeking to avoid more bloodshed, opposition forces also extended by a week a deadline for Gaddafi's hometown of Sirte, on the coast, to surrender.

Meeting the National Transitional Council in Paris, powers handed the NTC $15 billion of his foreign assets to start the job of rebuilding.

"The world bet on the Libyans and the Libyans showed their courage and made their dream real," Mahmoud Jibril, the prime minister in the interim government, said as NATO air forces maintained support for NTC fighters on the frontlines in Libya.

A history of tribal, ethnic and regional friction as well as divisions during the rebellion have created a wariness about the ability of the new leaders to introduce the stable democracy that is the declared goal for the potentially oil-rich nation of six million.

U.S. Secretary of State Hillary Clinton said U.N. sanctions should be lifted in a responsible way and the National Transition Council (NTC) should be given Libya's U.N. seat.

She said in Paris: "The work does not end with the end of an oppressive regime. Winning a war offers no guarantee of winning the peace that follows."

"We will be watching and supporting Libya's leaders as they keep their stated commitments to conduct an inclusive transition, act under the rule of law and protect vulnerable populations," she added, pledging to continue military support and calling on Gaddafi and his entourage to give themselves up.

Russia recognised the NTC as Libya's government on Thursday.

Abdel Majid Mlegta, coordinator of the Tripoli military operations room for the NTC, told Reuters "someone we trust" had said Gaddafi fled to Bani Walid, 150 km (95 miles) southeast of the capital, three days after Tripoli fell. With him were his son Saif al-Islam and intelligence chief Abdullah al-Senussi, all three of them facing international war crimes charges.

An Algerian newspaper said Gaddafi was in the border town of Ghadamis and phoned Algerian President Abdelaziz Bouteflika to appeal for refuge. Bouteflika did not take the call, though Algeria has taken in Gaddafi's wife and three of his children.

Mlegta said Gaddafi was planning a fightback from Bani Walid and appeals to notables in the town to hand over Gaddafi had gone unanswered. He ruled out attacking the town because of tribal ties shared by its residents and many NTC fighters.

Independent reports from Sirte and Bani Walid have not been available with communications cut. NTC commanders say residents are running low on supplies but many remain loyal to Gaddafi.

Mohammed Zawawi, an NTC spokesman in the eastern city of Benghazi, said extending a deadline for surrender until next Saturday would save lives.

"We're not in a rush to get in to Sirte," he said. "We're not going to lose casualties for it."

In the desert east of Bani Walid, a Reuters correspondent saw columns of anti-Gaddafi forces on patrol but found fighters unready to mount an offensive yet.

"Right now we are waiting. Everyone is ready to fight. Sirte will be liberated first, then Bani Walid," said fighter Ibrahim Obaidr.