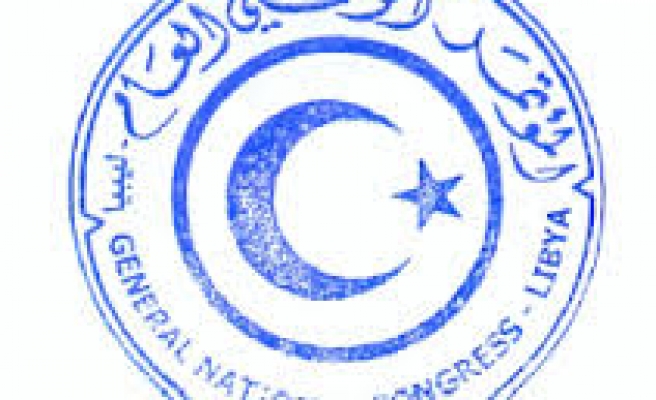 World Bulletin / News Desk
In a televised address, GNC deputy head Awad Abdel-Sadeq said,"We strongly condemn the Egyptian aggression on [the city of] Darnah and consider it a violation of Libya's sovereignty,"

"Libya is a sovereign state; combatting terrorism on its soil should be conducted by the [Libyan] state," he added.

Abdel-Sadeq also expressed the GNC's condemnation of the recent beheading of 21 Egyptian Coptic Christians by the ISIL in Libya.

The GNC has also decided to establish a joint force to secure the city of Sirte and deter any attempt to undermine its stability, Abdel-Sadeq said, giving no further details.

Earlier Monday, Libyan Air Force Chief-of-Staff Saqr Geroushi said at least 40 militants had been killed in airstrikes on ISIL targets in Libya in joint airstrikes carried out by the Egyptian and Libyan air forces.

The airstrikes came one day after a video appeared online showing the execution of 21 Egyptian Coptic-Christian workers in Libya by masked men purportedly belonging to ISIL.

In a televised address on Sunday following the video's appearance, Egyptian President Abdel-Fattah al-Sisi said his country "reserves the right to respond at the appropriate time to avenge the killing of its nationals."

Libya has remained a source of concern for neighboring Egypt since the North African country descended into chaos following the 2011 ouster and death of strongman Muammar Gaddafi.

In the more than three years since, Egyptians have been frequently targeted in Libya, prompting Cairo to warn citizens against travelling to the fractious nation.