Anti-Gaddafi forces had pushed to within a few hundred metres of the centre of Sirte, one of the last bastions of pro-Gaddafi resistance in Libya. 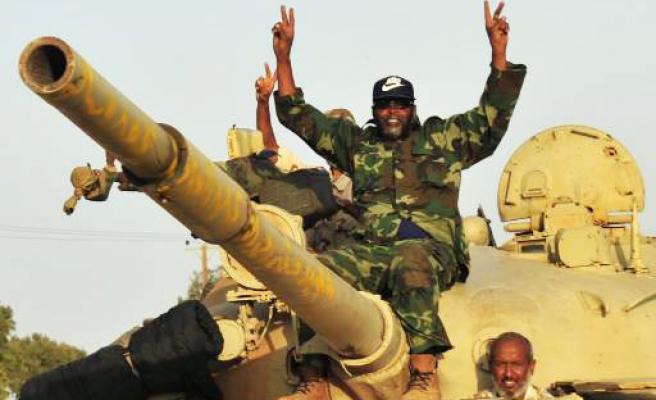 Fighters backing Libya's interim rulers prepared to renew their advance into the coastal city of Sirte on Monday after NATO aircraft bombed targets in Muammar Gaddafi's home town to sap the resistance of the deposed leader's troops.

Anti-Gaddafi forces had pushed to within a few hundred metres of the centre of Sirte, one of the last bastions of pro-Gaddafi resistance in Libya, but drew back on Sunday while NATO aircraft launched their attacks.

Sirte lies between the capital Tripoli and the eastern city of Benghazi, both now held by the National Transitional Council, whose fighters toppled Gaddafi last month, six months into a campaign that is not yet over.

Taking Sirte would be a huge boost for the NTC as it tries to establish credibility as a government able to unite Libya's fractious tribes and regions, and a blow for Gaddafi, widely believed to be on the run inside Libya.

Gaddafi loyalists showed they were still a threat by launching an attack on Sunday on the desert oasis town of Ghadames, on the border with Algeria, NTC officials said.

The NTC said on Sunday its followers had found a mass grave containing the bodies of 1,270 people killed by Gaddafi's security forces in a 1996 massacre of prison inmates in southern Tripoli.

The mass grave was the first physical evidence found so far of the Abu Salim prison massacre, an event that was covered up for years but created simmering anger that ultimately helped bring about Gaddafi's downfall.

Survivors have told human rights groups that guards lined up inmates in the courtyards of the Abu Salim prison at dawn on June 29, 1996, and security men standing on the prison rooftops shot them down.

The uprising that toppled Gaddafi was ignited by protests linked to the Abu Salim massacre. In February, families of inmates killed there demonstrated in Benghazi to demand the release of their lawyer.

There was little fighting on Sunday on the ground west of Sirte, where NTC fighters have advanced closest to the centre.

On the eastern side, their forces pushed to within 15 km (9 miles) of the city centre, an advance of more than 25 km.

A Reuters reporter there said NTC forces had been helped by NATO bombing, and said she could hear artillery fire and see black smoke on the horizon. Doctors at a hospital east of Sirte said one fighter had been killed and 12 wounded in clashes.

Gaddafi's spokesman contacted Reuters to deny reports that Gaddafi and his family had helped themselves to Libya's oil wealth, giving an insight into his current preoccupations.

"The leader of the revolution and his family are among the poorest citizens," said the spokesman, Moussa Ibrahim. He spoke by telephone and did not reveal where he was calling from.

Accounts from NTC fighters and people who had left Sirte indicated pro-Gaddafi forces were trying to prevent civilians from fleeing, effectively using them as human shields.

A man saying he was a hospital doctor in Sirte told Reuters by telephone it was NTC forces who were making civilians suffer. Wounded people were dying because medical supplies were running out and the hospital had been hit by shellfire, he said.

The doctor, who gave his name as Abdullah Hmaid, used the mobile telephone of the Gaddafi spokesman, Ibrahim, who is a native of Sirte.

The attack by pro-Gaddafi forces on Ghadames underlined the fragility of the NTC's grip even on parts of the country nominally under its control.

The town, about 600 km southwest of Tripoli, is near a border crossing that pro-Gaddafi Libyans have used to flee into Algeria. Its old town, an intricate maze of mud walls, is a UNESCO world heritage site.

"These militias have attacked our people in Ghadames city," the NTC's Bani told a news conference, adding that NTC fighters expected to be in full control of the area in "a matter of days".

A month after ousting Gaddafi's forces from Tripoli and most of the country, the challenge to the NTC's rule is now focused in Sirte and Bani Walid, a town about 170 km (105 miles) southeast of Tripoli.

Until both are captured, Libya's new rulers say they cannot begin the process of holding elections. Wrangling over ministerial portfolios has prevented them from forming a caretaker government, deepening uncertainty over the country's future.