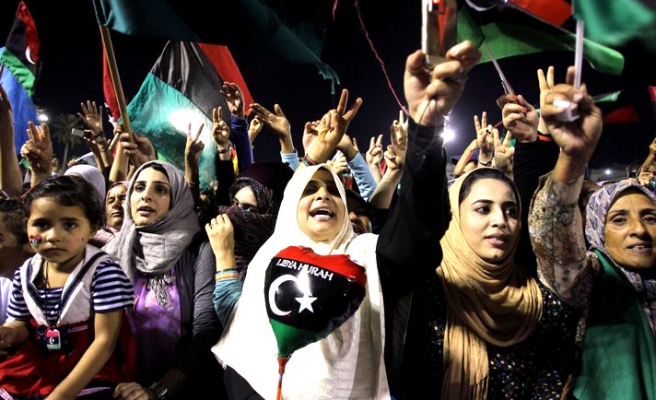 The chief of Libya's revolutionary movement told thousands of cheering Libyans in Tripoli Monday to strive for a civil, democratic state, while loyalists of the hunted Moammar Gadhafi killed at least 15 opposition fighters in an attack on a key oil town in Libya's east.

Mustafa Abdul-Jalil addressed a rowdy crowd of thousands in Martyr's Square in central Tripoli, a site that until recently was famous for pro-Gadhafi rallies.

Flanked by a few dozen revolutionary leaders in their largest public gathering since rebel forces stormed into the capital on Aug. 21, he called on Libyans to build a state based on the rule of law.

"No retribution, no taking matters into your own hands and no oppression. I hope that the revolution will not stumble because of any of these things," he said.

As he spoke, thousands waved flags, cheered and chanted, "Hold your head high, you're a free Libyan!" Some wept openly as fireworks exploded overhead.

Abdul-Jalil heads the National Transitional Council, founded in the eastern city of Benghazi early in the six-month civil war to guide the rebel movement. Its leaders have been arriving in the capital since it fell into rebel hands last month to start building a new government.

Abdul-Jalil, who served as Gadhafi's justice minister before joining the rebels at the uprising's start, defined the government he says the NTC hopes to create.

Libya's new leaders face the huge challenge of building a new government in a country with no recent history of democracy or independent civil institutions. They also have yet to extend their control over all of Libya.

From hiding, Gadhafi called on his remaining followers Monday to keep fighting.

A Syrian-based television station said on Monday it had received a new message from the fugitive Gaddafi, who has issued regular battle calls to his followers in the three weeks since Tripoli was overrun, but could not broadcast it for security reasons.

It quoted the ousted leader, who it said was still in Libya, as saying: "We cannot give up Libya to colonisation one more time ... There is nothing more to do except fight till victory."

Witnesses to the refinery attack said the assailants damaged the front gate of the facility, 20 km (13 miles) from the coastal town of Ras Lanuf, but not the plant itself, which is not fully operational.

Refinery worker Ramadan Abdel Qader, who had been shot in the foot, told Reuters that gunmen in 14 or 15 trucks had come from the direction of the Gaddafi-held coastal city of Sirte.

The assault occurred only hours after the NTC announced it had resumed some oil production, which had been all but halted since anti-Gaddafi protests turned into civil war in March.

Many senior NTC officials also see scooping up Gaddafi and the members of his family who are still on the run as crucial to finally declaring victory in the seven-month old war.

Gaddafi's son Saadi arrived in neighbouring Niger on Sunday after crossing the remote Sahara desert frontier. On Monday the U.S. State Department said that the government of Niger had confirmed to it that it intended to detain the former soccer player.

But a Nigerien government spokesman told Reuters that Saadi Gaddafi was only being watched for now.

"Nothing has changed in the government's position. There is no international search for him. Like the others he is just under surveillance," the spokesman said, referring to other Gaddadfi loyalists who have recently fled to Niger.

Two other sons and Gaddafi's only biological daughter have fled to Algeria. One son is reported to have died in the war and three others are still on the run.

The NTC has said it will send a delegation to Niger to seek the return of anyone wanted for crimes.

Niger, like Algeria, has cited humanitarian reasons for accepting fugitives of the former government, but has promised to respect its commitments to the International Criminal Court, which wants to try Gaddafi, son Saif al-Islam and intelligence chief Abdullah al-Senussi for war crimes.

NTC forces, which seized Tripoli on Aug. 23, said they were meeting fierce resistance on the fourth day of fighting for the Gaddafi-held desert town of Bani Walid, 150 km (95 miles) southeast of the capital, and were edging towards Sirte.