Life in Somali capital of Mogadishu is getting more dynamic following the visit of Turkish Premier Recep Tayyip Erdogan on August 19. 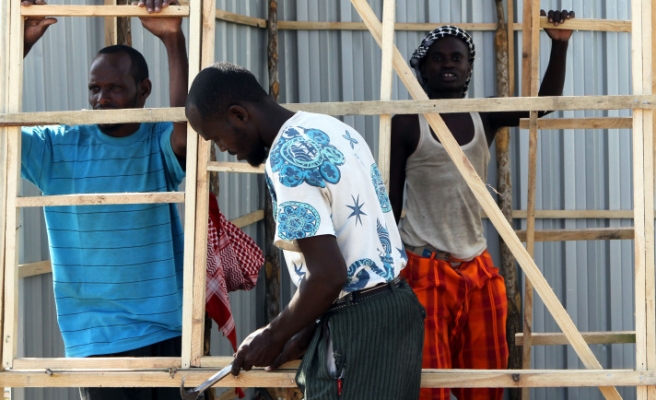 Life in Somali capital of Mogadishu is getting more dynamic following the visit of Turkish Premier Recep Tayyip Erdogan on August 19.

Many individuals now walk in the city and do shopping. Up until recently, people were afraid to get out of their homes due to security reasons.

One can see meat, bananas, pumpkins, breads, water and other food materials as well as clothing being sold in the markets of Mogadishu.

Repairs are also underway for the square known as the "4th Kilometer" located in downtown Mogadishu. One can see the pictures of Turkish Prime Minister Recep Tayyip Erdogan and Somali President Sheikh Sharif Sheikh Ahmed at this square.

Roads that were damaged during the civil war in Mogadishu are being repaired. Many civilian motor vehicles could be seen on the roads. However, traffic lights of Mogadishu are currently not operational.

Thousands of students are receiving education in the schools of Mogadishu. The schools are also getting repaired and cleaned.

One can notice efforts to restore the city's two hospitals, Medine and Banadir.

All interior walls of Banadir Hospital are getting painted. Construction of additional buildings at the hospital is underway. Medical equipment sent by aid organizations are being placed in the hospitals.

Medine and Banadir hospitals can provide meals to their patients thanks to the assistance extended by Turkey's Religious Foundation (TDV).

Many homes in Mogadishu are going through repairs after the civil war. The city receives electricity and water for most part of the day.

Many cargo jets arrive in Mogadishu each day. However, neither departures nor arrivals are permitted in Mogadishu Airport after 18.00 hours due to security reasons.

People in Mogadishu are afraid to get out of their homes after sunset due to security concerns.

Only security forces could be seen on the streets of Mogadishu at night.

At times, clashes between Essebab members and soldiers of the African Union Peace Force could be seen in the city.

Sounds of bullets flying around could be heard in Mogadishu throughout the night.

Troops of the African Union Peace Force try to provide security at the Mogadishu Airport and its surrounding.

It is almost impossible to see a building in Mogadishu that was not damaged during the civil war. People live in partially damaged homes.

Women cook meals on wood fire and wash clothes with their hands.

Unemployment in Mogadishu is extremely high.

The recent increase in the population of Mogadishu caused an hike in the prices of commodities being sold.